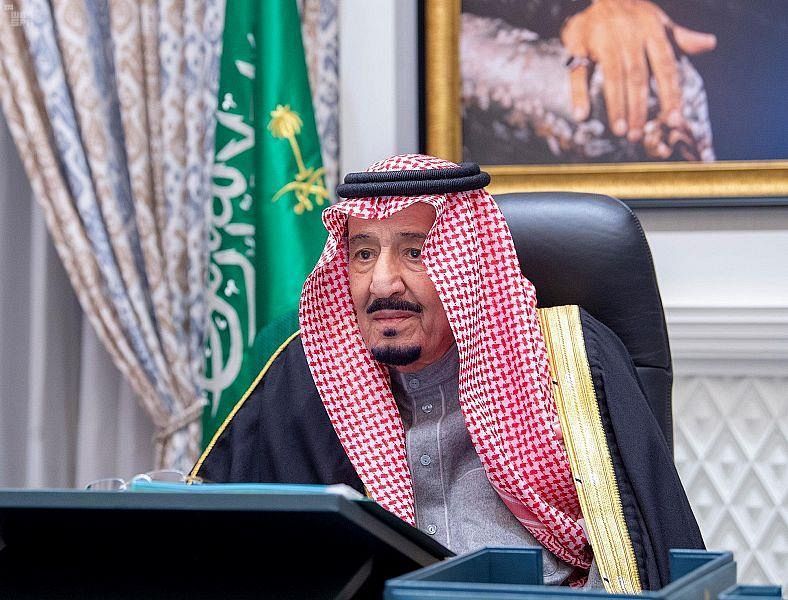 The Custodian of the Two Holy Mosques King Salman bin Abdulaziz Al Saud, the Prime Minister, chaired today the Cabinet's virtual session.
At the outset of the session, the Custodian of the Two Holy Mosques briefed the Cabinet on the contents of the written message that he received from Sheikh Nawaf Al-Ahmad Al-Jaber Al-Sabah, the Emir of the State of Kuwait. The message emphasized the strengthening of the bilateral relations that bind the two countries and peoples in various fields.
The Cabinet reviewed developments related to the novel coronavirus pandemic (COVID-19) at the local and international levels, the latest COVID-19 statistics in the Kingdom of Saudi Arabia. The Cabinet also reviewed the work of the national campaign for vaccination, in light of the resumption of the supply of vaccines, the arrival of new vaccines batches, and the opening of vaccination centers in various regions, as an implementation of the royal directives, and within the continuous efforts of the competent authorities to preserve the health of citizens and expatriates and limit the spread of the virus.
In a statement to Saudi Press Agency (SPA), Acting Minister of Media Dr. Majid bin Abdullah Al-Qasabi pointed out that the Cabinet discussed the results of the Kingdom of Saudi Arabia initiatives aimed at supporting the stability of global oil markets and the sustainability of its supplies to the world, with the aim of mitigating the effects of the COVID-19 pandemic and enhancing energy security and market balance. The Kingdom's affirmed at the IEA-IEF-OPEC Symposium the importance of cooperation to address the challenges of the pandemic and limit its impacts on global economic growth, and work to overcome them through collective action, dialogue and transparency of data in the energy field, and to accelerate joint efforts in realization of what the Kingdom has dedicated during its presidency of the G20 countries.
The Cabinet the reviewed the latest developments in the region and world. The Cabinet expressed the Kingdom's aspiration for the brothers in Somalia to reach a solution by peaceful means through dialogue, in a way that preserves its security, stability and unity, in light of the developments of events that led to deaths and injuries in the capital, Mogadishu.
Dr. Al-Qasabi pointed out that the Cabinet reiterated the Kingdom's denunciation of the Iran-backed terrorist Houthi militia's continuation of escalation through the attempts to attack the civilians and the civilian objects in the Kingdom, in a deliberate and systematic manner, which the forces of the Coalition to Restore Legitimacy in Yemen have managed to intercept, and to take the operational measures in accordance with the humanitarian international law and its customary rules.
The Cabinet was briefed on the issues on its agenda, including some co-studied by the Shura Council. The Cabinet was also briefed on the results reached by each of the Council of Economic and Development Affairs, the Council of Political and Security Affairs, the General Committee of the Cabinet, and the Cabinet's Bureau of Experts
The Cabinet issued the following decisions:
First: The Cabinet approved a cooperation agreement between the Kingdom of Saudi Arabia and the Southeast European Law Enforcement Center (SELEC).
Second: The Cabinet authorized Minister of Finance, who is also Chairman of the Board of Directors of the Saudi Customs - or his representative - to discuss and sign a memorandum of understanding between the Kingdom of Saudi Arabia and the Government of New Zealand on cooperation and mutual assistance in customs matters.
Third: The Cabinet authorized Minister of Investment - or his representative - to discuss and sign a draft protocol attached to a memorandum of cooperation between the Government of the Kingdom of Saudi Arabia and the Republic of Korea on the Saudi-Korean Vision 2030, approved by the Cabinet Resolution No. (279) dated 6/4 /1439 AH.
Forth: The Cabinet approved the controls for members of the boards of directors of the agencies and their committees.
Fifth: The Cabinet approved the organization of the periodic technical inspection of vehicles.
Sixth: The Cabinet approved joining of the National Program to Support Project Management, Operation and Maintenance in Public Entities to the Center for Achieving Expenditure Efficiency, and transforming the center into an authority named the "Government Expenditure and Projects Efficiency Authority", and approved its organization.
Seventh: The Cabinet approved a number of promotions at the 14th and 15th ranks.
The Cabinet was briefed on a number of issues on its agenda and took relevant recommendations.