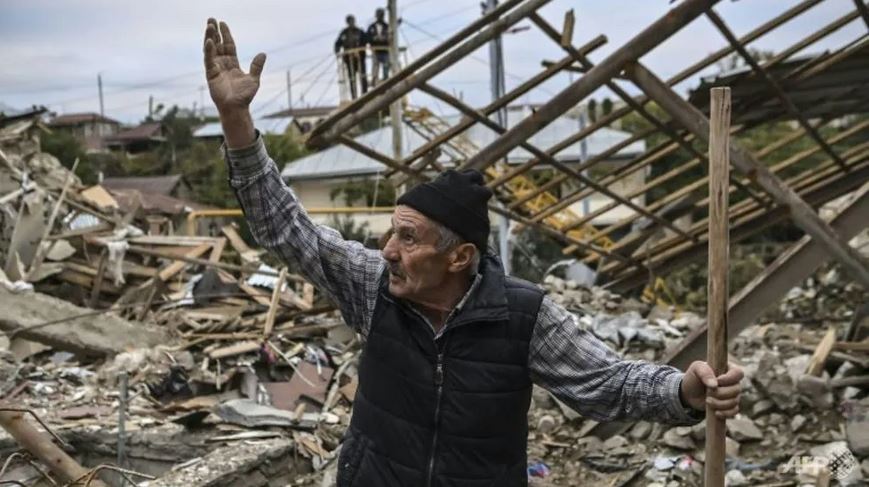 More than two weeks of fighting between the Caucasus rivals has left almost 600 dead, including 73 civilians AFP/ARIS MESSINIS
MOSCOW - Reuters

Russia appeals to Armenia and Azerbaijan over Nagorno-Karabakh ceasefire

Russia made a new appeal to Armenia and Azerbaijan to stop fighting in and around the mountain enclave of Nagorno-Karabakh after the warring sides accused each other of fresh ceasefire violations on Wednesday (Oct 14).

Russian Defence Minister Sergei Shoigu made the appeal by telephone to the Azeri and Armenian defence ministers, urging the countries to "fully meet the commitments" made under the fraying humanitarian ceasefire brokered by Moscow on Saturday.

Each side denied violating the ceasefire over Nagorno-Karabakh, which is internationally recognised as part of Azerbaijan but is governed and populated by ethnic Armenians, though Azeri President Ilham Aliyev later said his country's forces were continuing military operations.

The defence ministry in Nagorno-Karabakh accused Azeri forces of launching artillery and rocket attacks in several areas. Defence officials in the enclave said their forces had shot down an Azeri Su-25 fighter jet but Azerbaijan denied this.

Azerbaijan's defence ministry accused Armenian forces of new attacks on Azeri army positions along the line of contact that divides the two sides, and that the Terter, Aghdam and Aghjabedi regions inside Azerbaijan were under artillery fire. The Azeri prosecutor's office reported one new civilian death and several wounded, including Azeri journalists.

The ceasefire is buckling despite mounting calls from world powers to halt the fighting, which has killed more than 500 people since the decades-old conflict flared on Sep 27. International groups have warned of a humanitarian crisis, with people forced from their homes and a growing COVID-19 pandemic.

The fighting is the worst since a 1991-1994 war over Nagorno-Karabakh that killed about 30,000 people. It is being closely watched abroad partly over fears that Russia and Turkey could be sucked in. Russia has a defence pact with Armenia, and Turkey is allied with Azerbaijan.

In an interview with Reuters on Tuesday, Armenian Prime Minister Nikol Pashinyan accused Turkey of muscling its way into the South Caucasus region to further what he called its expansionist ambitions.

Turkey has denied this and says Armenian forces must withdraw from Nagorno-Karabakh to resolve the conflict. 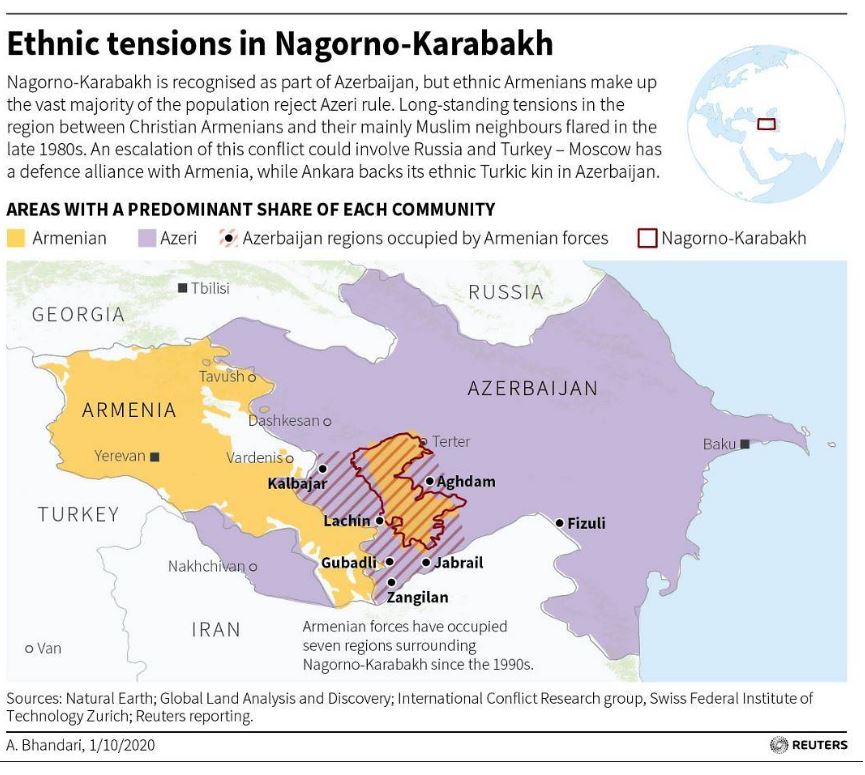 The "Minsk Group" - set up by the OSCE security watchdog in 1992 to help mediate in Nagorno-Karabakh - called on the Armenian and Azeri leaders on Tuesday to implement the ceasefire to prevent "catastrophic consequences for the region".

The 11-member group is led by the United States, Russia and France. Turkey is also a member but not involved in the Nagorno-Karabakh talks, though it has said it wants to join them.

Former US Vice President Joe Biden, President Donald Trump's Democratic rival in the Nov 3 presidential election, expressed deep concern over the "collapse" of the ceasefire and accused the Trump administration of being "largely passive and disengaged".

"Rather than delegating the diplomacy to Moscow, the administration must get more involved, at the highest levels," Biden said in a statement.

Nagorno-Karabakh officials said on Tuesday 532 servicemen had been killed since fighting flared on Sep 27. They did not immediately update the death toll on Wednesday.

The latest death reported by Azerbaijan's prosecutor general appeared to take the toll to 43 Azeri civilian deaths since Sep 27. Azerbaijan has not disclosed military casualties.