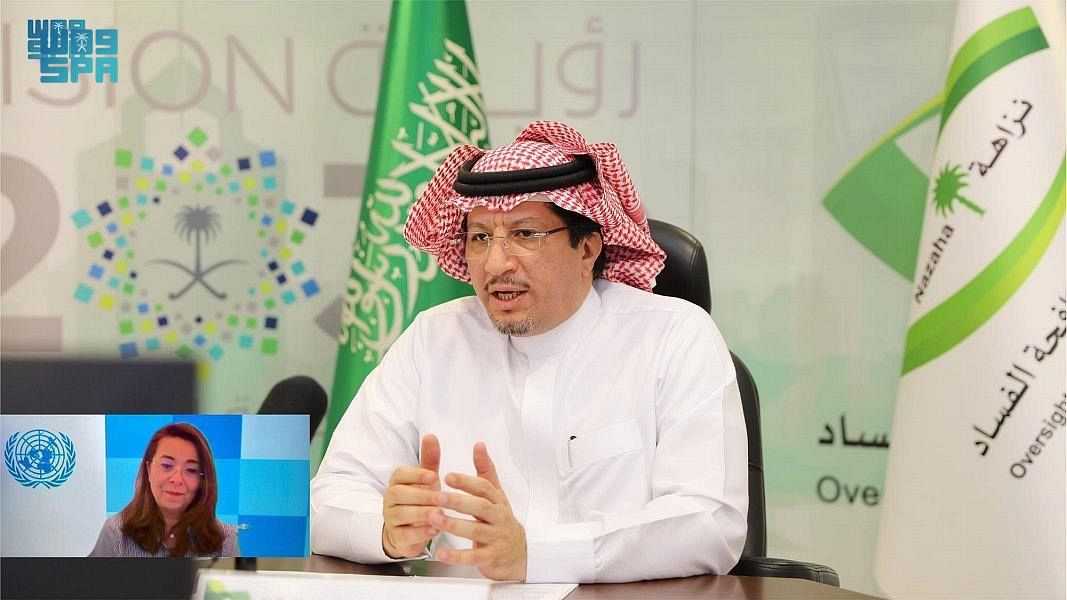 President of Oversight and Anti-Corruption Authority (Nazaha) Mazin bin Ibrahim Al-Kahmous met here today virtually with Executive Director of the United Nations Office on Drugs and Crime (UNODC) Dr. Ghada Waly. They went over achievements and future plans related to the Riyadh Initiative that aims at enhancing international cooperation among law enforcement authorities related to anti-corruption, which G20 leaders welcomed in the Riyadh Statement of G20 leaders. Anti-corruption ministers, during their first ministerial meeting of G20 countries held in October, 2020, also welcomed the initiative.
Al-Kahmous and Dr. Waly also discussed issues of mutual interest under the Riyadh Initiative and its executive mechanisms, mainly establishing an international network for law enforcement authorities related to anti-corruption under the umbrella of the UNODC, founding a safe international platform to facilitate the exchange of information among law enforcement authorities related to anti-corruption, and launching a program to build up the capabilities of members of the network in a way that enhances countries’ abilities to prosecute corrupt people and track their money to limit safe havens and retrieve stolen public money to their original countries.
Al-Kahmous commended the indefinite support of the Custodian of the Two Holy Mosques King Salman bin Abdulaziz Al Saud and HRH Crown Prince for the authority’s efforts in its initiatives and cooperation with regional and international commissions. He noted that the Riyadh Initiative seeks to enhance direct international cooperation among anti-corruption authorities across the world in a way that speeds up the exchange of information in cross-border corruption cases.
For her part, Dr. Waly expressed appreciation for the Kingdom of Saudi Arabia’s efforts in supporting the implementation of the Riyadh Initiative, hoping that the initiative will contribute to boosting the efforts of the international community in fighting corruption.