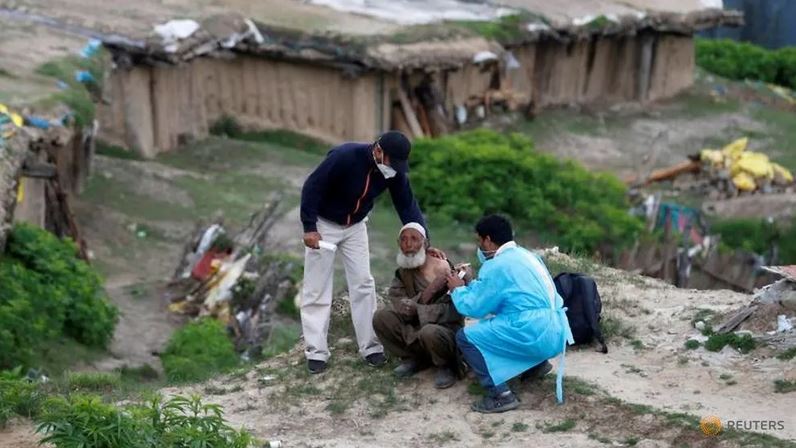 A shepherd receives a dose of COVISHIELD, a COVID-19 vaccine manufactured by the Serum Institute of India, during a vaccination drive at Tosa Maidan in central Kashmir's Budgam district on Jun 21, 2021. (File photo: Reuters/Danish Ismail)
BENGALURU - Reuters

India's COVID-19 vaccinations over the next few weeks could fall short of the blistering pace set on the first day of a federal campaign, unless it makes inroads in a vast hinterland and bridges a shortage of doses, experts said on Tuesday (Jun 22).

The 8.6 million doses injected on Monday represented a record two-fold jump as India kicked off free inoculations for all adults, reversing a policy for individual states and hospitals to buy vaccines for those aged 18 to 44.

"This is clearly not sustainable," Chandrakant Lahariya, an expert in public policy and health systems, told Reuters.

"With the currently projected vaccine supply for the next few months, the maximum daily achievable rate is 4 million to 5 million a day."

The inoculation effort in the world's second-most populous nation had covered just about 5.5 per cent of all the 950 million people eligible, even though India is the world's largest producer of vaccines.

A devastating second wave of infections during April and May overwhelmed medical staff and facilities, killing hundreds of thousands. Images of funeral pyres blazing in car parks and open spaces spurred questions over the chaotic vaccine roll-out.

Since May, India has distributed an average of fewer than 3 million doses each day, far less than the 10 million health officials say is crucial to protect the millions vulnerable to new surges.

Particularly in the countryside, where two-thirds of a population of 1.4 billion lives and the healthcare system is often overstretched, the drive has faltered, experts say.

Maintaining the pace of the vaccination effort will prove particularly challenging when it comes to injecting the younger population in such "underserved" areas, said Delhi-based epidemiologist Rajib Dasgupta.

Widespread vaccine shortages since May have worsened the divide between urban and rural areas, as many younger people in cities turned to private hospitals, paying between US$9 and US$24 a dose in the rush to protect themselves from the virus.

Such regional gaps in healthcare are exacerbated unless comprehensive data is made available on vaccinations, among others factors, said Bhramar Mukherjee, a professor of epidemiology at the University of Michigan.

Authorities in New Delhi said that more than 8 million residents had yet to receive a first dose, and added that inoculating all the adults in the capital would take more than a year, at the current pace.

Even as new infections have dropped nationwide to their lowest in more than three months, experts expressed concern over the transmissibility of the variants driving infections in India and spreading worldwide, and urged a faster vaccination effort.

Its tally of infections now stands at 29.98 million, with a death toll of 389,302, health ministry data showed.