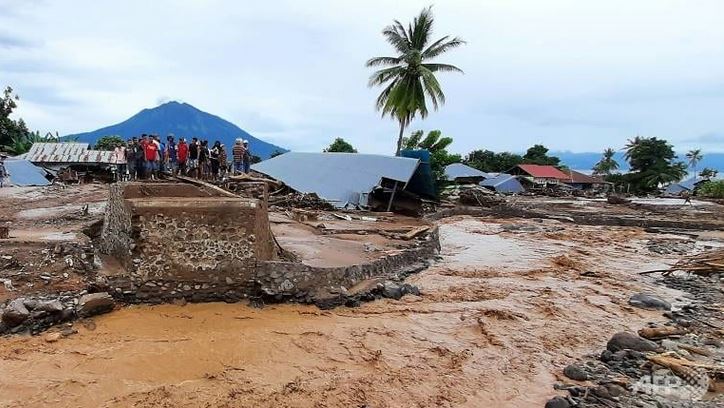 Torrential rains from Tropical Cyclone Seroja, one of the most destructive storms to hit the region in years, turned small communities into wastelands of mud. (Photo: AFP/Reynold Atagoran)
LEMBATA, Indonesia - AFP

Indonesia's navy readied hospital ships on Wednesday (Apr 7) to help treat injured survivors of a cyclone that has killed about 160 in the archipelago and neighbouring East Timor, as fears grow over coronavirus outbreaks in cramped evacuation shelters.

Helicopters were also dropping food and other essentials into remote villages, while sniffer dogs were deployed to search for the dozens still missing after weekend floods and landslides devastated the Southeast Asian nations.

Torrential rains from Tropical Cyclone Seroja, one of the most destructive storms to hit the region in years, turned small communities into wastelands of mud and uprooted trees, sending thousands fleeing to shelters.

The storm swept buildings in some villages down a mountainside and to the shore of the ocean on Indonesia's Lembata island.

Dozens were killed on Adonara island, where Sugeng lost his 20-year-old daughter when a wall of water tore into his family's home. Her body was later found on a beach.

"She was trying to hold on to a cupboard but the current was so strong that she lost her grip," said the 60-year-old, who like many Indonesians goes by one name.

The hospital ships were due to leave for the storm-hit region from Jakarta and Semarang, a city east of Indonesia's capital, said Raditya Jati, spokesman for the disaster agency.

The agency also said sniffer dogs would hunt through mountains of debris and rubble for the bodies of more than 70 still-missing victims - and any survivors.

"It was very scary because we've only seen that kind of scene on TV before, but now we experienced it," mother-of-two Maria Herlina Tula said of the flooding.

"Our home is flooded and everything in it is gone."

More than 120 people have been listed as dead in a remote cluster of islands at the eastern end of the Indonesian archipelago.

About three dozen people were killed in East Timor - a tiny half-island nation of 1.3 million sandwiched between Indonesia and Australia that is officially known as Timor-Leste.

Timor authorities have not said how many people are missing.

Its capital Dili was inundated, with the front of its presidential palace transformed into a mud pit.

The cyclone was moving toward the west coast of Australia, where it could make landfall by early next week. 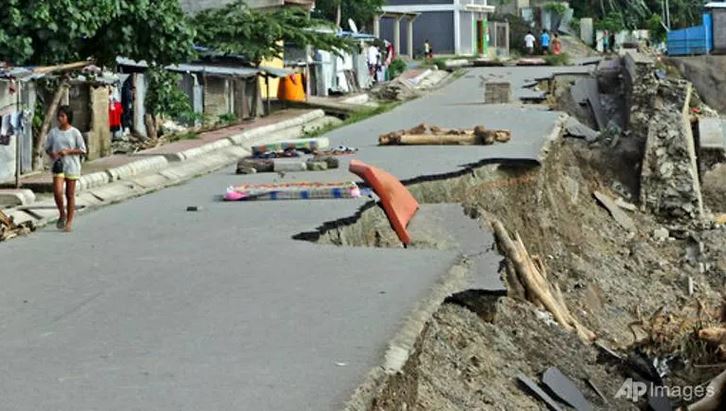 A woman walks along a road damaged by major flooding in Dili on Apr 6, 2021. (Photo: AP/Kandhi Barnez)

Rescuers have spent the past few days using diggers and shovels to extract mud-covered corpses from the debris.

Hospitals, bridges and thousands of homes were damaged or destroyed by the storm.

Authorities in both countries were also battling to avoid COVID-19 outbreaks in crammed evacuation shelters.

Indonesia's disaster agency said it would distribute 500,000 rupiah (US$35) to homeless families so they could secure rental accommodation instead of seeking refuge at makeshift shelters.

"This is to prevent the spread of COVID-19 infections," said disaster agency chief Doni Monardo.

"We must avoid crowds inside the tents."

A cargo plane was to leave Jakarta for the disaster-struck region with about 100,000 face masks, virus test kits as well as prepared food and blankets for survivors, Monardo added.

Fatal landslides and flash floods are common across the Indonesian archipelago during the rainy season, with deforestation often the cause, environmentalists say.

The disaster agency has estimated that 125 million Indonesians - nearly half of the country's population - live in areas at risk of landslides.