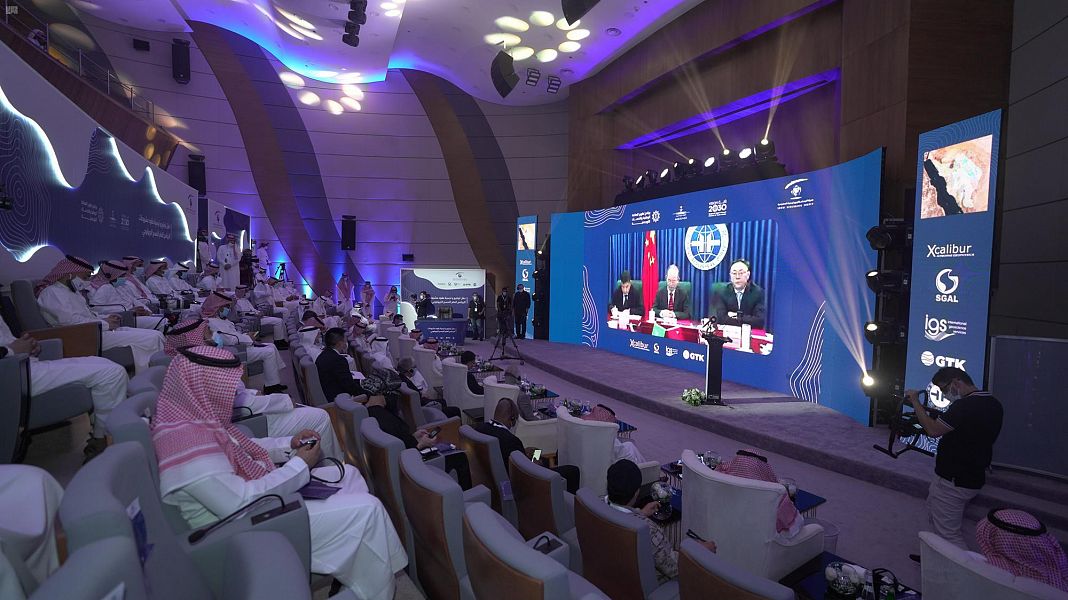 In a virtual signing ceremony launched from Riyadh, Saudi Arabia, and headed by His Excellency Bandar Al-Khorayef; Minister of Industry and Mineral Resources, Chairman of the Board Directors of the Saudi Geological Survey (SGS), one contract and three contract awarding documents were signed, as a part of the SGS ambitious Regional Geological Survey Program. The signing was between SGS and Sander Geophysics Arabia Ltd. (SGAL), Xcalibur Airborne Geophysics Company, China Geological Survey, and a Consortium of the United Kingdom’s International Geoscience Services Limited (IGS) and the Geological Survey of Finland (GTK).
In a comment on the event, His Excellency Minster Al-Khorayef said: “This is an exciting start to the data-gathering effort that forms the fundamental basis for the RGP, which, in turn, is key to the Kingdom’s 2030 Vision that aims at transforming the mining sector into the third pillar of Saudi Arabian industry.”
The SGS clarified that during this phase of the RGP, it will focus on surveying and mapping some 600,000 square Kilometres of the mineral-rich Arabian Shield area in western Saudi Arabia, over the next six years, in a bid to better understand the existence and distribution of mineral resources in that area and provide a valuable database of geological knowledge to future mining investors and operators.
The SGS added that as per the signed contracts, Sander Geophysics Arabia Ltd. (SGAL), a joint venture based in Al-Khobar; eastern Saudi Arabia. will provide airborne geophysical survey of block 1 of the Arabian Shield for a total contract value of 71,883,079 Saudi Riyals (about $19 Million).
The other three contracts that were awarded in the ceremony include a contract with the South African, Xcalibur Airborne Geophysics Company to provide airborne geophysical survey of blocks 2 and 3 of the Arabian Shield, for a total contract value of 96,020,044 Saudi Riyals (about $26 Million), a contract with China Geological Survey to provide geochemical survey throughout the entire Arabian Shield area, for a total contract value of 201,167,857 Saudi Riyals (about $54 Million), and a contract with a Consortium of the United Kingdom’s International Geoscience Services Limited (IGS) and the Geological Survey of Finland (GTK), who will be overseeing technical aspects of the RGP, ensuring the quality of operation and produced data, for a total contract value of 185,437,500 Saudi Riyals (about $49.5 Million).
The SGS also affirmed that the main goal of launching the RGP initiative is to build on the efforts exerted in geophysical and geochemical survey, and in developing geophysical maps, to produce detailed digital geological maps of the Arabian Shield area, that accurately reflect the types, locations, and quantities of mineral resources in the area. These maps will be solid, clear and reliable foundation for investment or operational decisions in the mining sector, and, accordingly, enhancing the exploitation of the Kingdom’s mineral resources, which are estimated at about $1.3 Trillion, to contribute to diversifying the resources of the national economy. The mining sector will, then, be able to raise its contribution to government revenues from about five billion riyals in 2015 to about 14 Billion Riyals in 2030, and its contribution to the GDP from 64 Billion Riyals in 2015, to about 240 Billion Riyals in 2030, and to add 220,000 new jobs to the 150,000 jobs currently in the sector.
Responding to a question about the outcome of the RGP, His Excellency Vice Minister Al-Mudaifer said: “Through these global collaborations, the first leap has been taken. We know there is such great mineral potential within our kingdom, but this program will give us an even greater understanding of the untapped mineral resources of our country.”
Talking about the ceremony and the RGP, Dr. Wadee Kashghari, the leader of the RGP initiative in SGS said: “I am glad and proud to see our efforts to build such a strong and effective partnership come to fruition! And I am confident that I will be prouder and a lot happier when I see the invaluable data that we will collect, analyze and make public as the outcome of this program, six years from now!”
Expressing his views, Stephan Sander, SGAL’s Co-President said: “We have a decades-long history of working within the Kingdom, but this is the largest, boldest project so far. We are glad to be a part of it.”
On his part, Simon Bosch; CEO of Xcalibur Airborne Geophysics Company said: “It is a pleasure to be working with the SGS as they enhance their knowledge of the Kingdom’s mineral resources through the RGP.”
Moreover, His Excellency the Chinese Vice-Minister of Natural Resources, President of China Geological Survey, Dr. Zhong Ziran commented on the event saying: “It is the beginning of a great cooperative relationship between the two sides and will surely open up new cooperative areas for both countries. We have full confidence in the all-round China-Saudi cooperation on geosciences in the future.”
Finally, the Managing director of IGS, Dr Peter Zawada talked about his feeling regarding the selection of the Consortium he represents to be the technical partner in the RGP. He said: “We are pleased and honored to assist SGS and the Kingdom in one of the world’s largest integrated program of geodata acquisition. As a consortium we have assembled many specialists and experts and am confident that we will ably support SGS throughout the duration of the program.”
The virtual event was attended by representatives from each of the national and international Geoscience entities, Ministers, ambassadors, as well as officials from the Ministry of Industry and Mineral Resources and the SGS.
The RGP is a vital step in the Kingdom’s strategy to transform the mining sector into one that can compete with other giants of the economy, a key part of the country’s proposed development plan, Saudi Vision 2030.