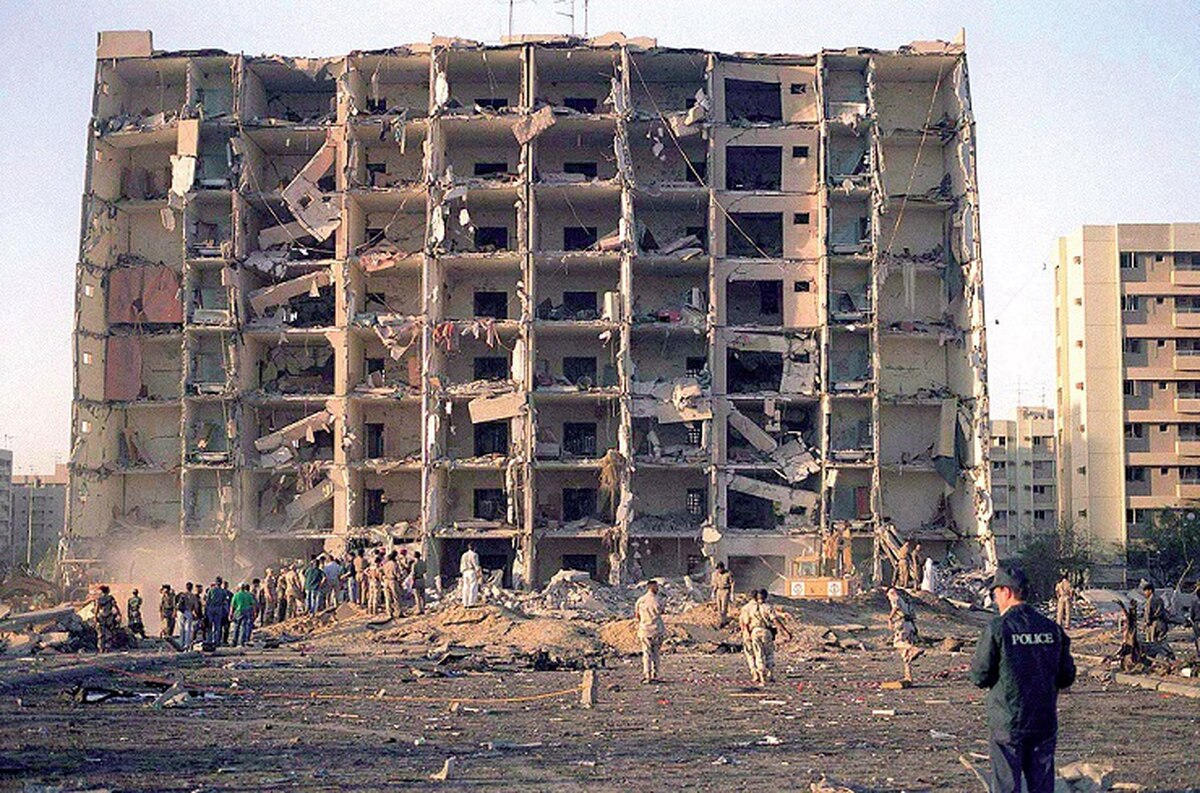 Nineteen Airmen died and hundreds were injured in the terrorist attack at Khobar Towers in Dhahran, Saudi Arabia, on June 25, 1996. At the time, it was the worst terrorist attack against the American military since the bombing of a Marine Corps barracks in Beirut, Lebanon, in 1983.
Riyadh "airforcetimes"

It was nearly 10 p.m. on a Tuesday, Senior Airman William Christian Nevins was on the fifth floor of Building 131, where he lived while deployed to the Middle East in June 1996.

Fellow airmen were going about their weekday evenings, cleaning the kitchen, lounging on their couches, some sleeping.

Just outside the perimeter, a truck lumbered through Dhahran, Saudi Arabia to the main entrance of King Abdulaziz Air Base and was waved off. A terrorist bombing in Riyadh the previous year had raised the threat level but for most it was deployment as usual. But so far, all had been secure at the base, which housed the Khobar Towers.

The hundreds of Air Force and international coalition personnel were working on Operation Southern Watch, which launched shortly after the Persian Gulf War to provide a “no-fly zone” over southern Iraq, preventing dictator Saddam Hussein from attacking his own people or even pushing troops back into Kuwait.

The truck did not turn around and go home. Using two other vehicles as a spotter and getaway, the crew outside the gate found a parking perhaps 100 feet from the building where Nevins lived, a three-year investigation would later uncover. Three vehicles drove to that side, two left.

Minutes later the service truck that had been modified over a two-week period following a three-year planning operation by Hezbollah exploded, ripping the face off of building 131, shattering glass and throwing bodies across rooms and out of empty spaces where walls once stood, according to court documents, 19 others died in the blast, more than 400 were wounded.

The attackers fled, most still remain at large, though they face a federal indictment if ever caught, according to the FBI’s Most Wanted List.

The immediate and lingering aftershock would reverberate through the lives of the many people there that day, those they loved far away and into a future that hasn’t yet calmed for most.

U.S. District Court Chief Judge Beryl Howell ruled from the Washington, D.C. district last week that the backers, planners and supporters of the bombing — Iran and its terrorist arm — should pay out $819,120,000 to 14 airmen and 41 of their family members who suffered that day and have been suffering since.

“Justice has not forgotten these brave U.S. Air Force veterans and their families. It is an honor and privilege to fight for justice and compensation for these families,” said Adora Sauer, plaintiffs’ lead attorney. “The passage of over two decades since the Khobar Towers attack has not thwarted our efforts. We will continue to seek to hold the Government of Iran accountable for this terrorist attack as long as is necessary.”

The airmen in the lawsuit were awarded between $3 million and $7 million each, based on records from past court decisions and disability ratings along with other legal damages.

Proportionately, the dependents named in the lawsuit were awarded between $1.25 million and $4 million, based on the injuries suffered by their loved ones and other legal formulas.

“The physical and psychological toll on our families has been extremely high, but this judgment is welcome news,” said retired Air Force Staff Sergeant Glenn Tyler Christie. “More than 20 years on, we want the world to remember the evil that Iran did at the Khobar Towers. Through the work of our attorneys, we intend to do just that.”

This is not the first lawsuit to award money to victims whose attacks were linked to Iran. In 2018, the same judge awarded $104.7 million to 15 servicemembers and 24 relatives hurt in the Khobar Towers bombing.

Iran historically has not responded to lawsuits such as these and routinely denies the claims made against them. This case was no different. A monetary payout is not likely barring seizing of assets or state funds by the United States or international governing bodies.

Military Times has reported extensively on court cases involving veterans and their families who suffered as a result of terrorist attacks in Iraq by Iranian-supported groups.

Back on the ground in Saudi Arabia, the bomb blast shook the earth 20 miles away across the border in Bahrain, residents reported. Security planners had taken extra precautions after the November bombing in Riyadh. They would be criticized for underestimating the bomb-making capabilities of factions in the area.

The Khobar Towers bombing used an estimated 5,000 pounds of plastic explosives. It was 10 times as powerful as the Riyadh bombing.

Nevins was blown off his feet, hit by debris and looked down to see a large piece of glass sticking out of his left knee.

Others tumbled from their beds or couches, lockers, doors and appliances careening across their small rooms and pinning them or landing on them along with the shards of glass that coated everything.

Twenty-four years later, Senior Airman Steven Neal Wilson still has glass embedded in his skull, ringing in his ears and fingers on his left hand that don’t work quite right because some of that glass severed tendons that make them flex.

But nearly all, wounded or not, rushed to aid their fellow airmen, carrying bodies both living and dead own flights of stairs. Lights blasted out, more than one airman was treated by the glow of a Coke vending machine in a nearby building.

As airmen on the ground recovered, many of their wives, children, parents and siblings would learn from the news what had happened and wait breathlessly for news from their loved one to know if they survived.

Sandra Olivia Bouse, then-wife of Senior Airman Clayton Omar Zook, heard from her supervisor while working on Luke Air Force Base in Phoenix, Arizona what had happened. She “frantically rushed outside” to call the base operator in Saudi Arabia to learn what happened.

Sheila Lynn Jackson, mother of Senior Airman Joseph Martin Jackson saw it on the news, fell to her knees and began crying hysterically.

Glass cuts healed. Broken bones mended. Years would pass before some sought counseling or were diagnosed for the brain trauma and other wounds they’d sustained. But the nightmares continue for many.

In their own time, the airmen in this lawsuit did get help and many were given Veterans Health Administration disability ratings, though they still have their wounds, mental and physical.

But in the court documents, a phrase repeated again by family members of airmen who have never met echoes, nearly a quarter-century after the attack. Their son, their father, their husband is “not the same person.”