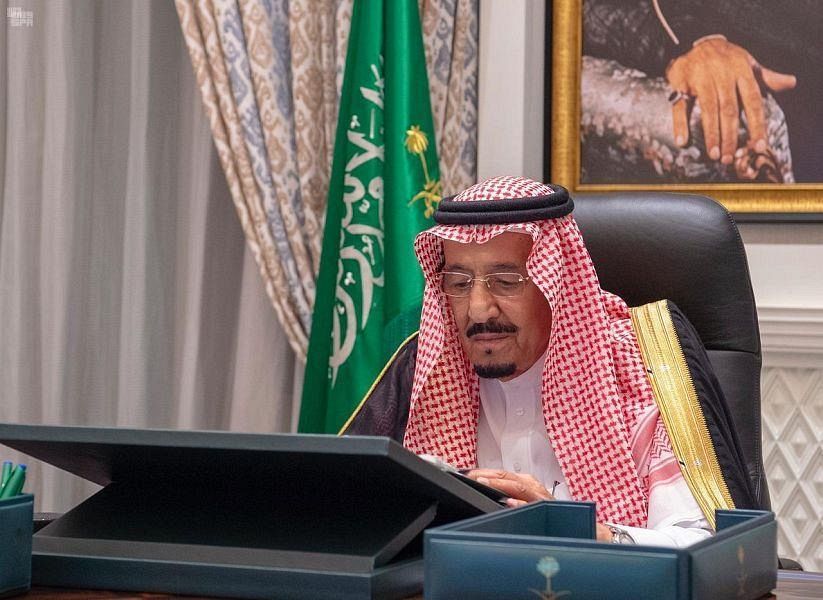 The Custodian of the Two Holy Mosques King Salman bin Abdulaziz Al Saud, Prime Minister, chaired today the Cabinet's virtual session.
At the outset of the session, the Cabinet was briefed on the latest developments related to the Coronavirus pandemic locally and globally, its developments in the preventive and treatment sides, the latest statistics recorded in the Kingdom, and the results of advanced laboratory tests that have nearly reached seven million examinations, in light of the stability of the index of infected cases, and the increasing rates of recovery, thanks to the preventive measures and health protocols taken, and the medical and health services provided by the state to preserve the health and safety of citizens and expatriates and confront this pandemic and limit its spread.
The Cabinet considered that the issuance of the royal order to continue the educational process remotely until the end of the first semester as a confirmation of the care by Custodian of the Two Holy Mosques and His Royal Highness the Crown Prince for the safety of students, and members of the administrative, educational and training body in schools, institutes, colleges and universities, and their protection from the risks of their exposure to infection with the Coronavirus, as well as their support for and eagerness to continue education through technical capabilities under exceptional circumstances.
In his statement to the Saudi Press Agency, Dr. Majid bin Abdullah Al-Qasabi, the Acting Minister of Media, stated that the Cabinet described the positive estimates of the credit rating agencies of the Kingdom's economy as reflecting its durability, flexibility and ability to face global economic challenges, the effectiveness of structural reforms and financial and economic policies, and the strength of the financial position of the Kingdom and its ability to continue growth, especially in light of the exceptional crises and circumstances that the world is currently witnessing, stressing that the Kingdom is continuing to achieve the goals of its vision towards enabling its financial sector to be among the largest financial centers in the world by 2030, despite the global economy facing the repercussions of the Coronavirus pandemic.
The Cabinet expressed the Kingdom's interest and keenness to promote the values of pluralism and international cooperation stipulated in the United Nations Charter, to achieve sustainable development plans and goals and overcome challenges to reach a more inclusive and just world. The Cabinet Referred in this regard to the Kingdom's invitation during the work of the Economic and Financial Committee at its seventy-fifth session of the United Nations General Assembly due to the importance of promoting the 2030 Sustainable Development Goals in light of the economic, security, and geopolitical changes, and global health challenges, represented by the spread of epidemics and their negative impact on development gains.
The Kingdom achieved during its presidency of the G20 countries several unprecedented achievements by taking preventive measures and addressing unforeseen consequences and shocks to the global economy.
The Cabinet renewed the Kingdom's strong condemnation of the terrorist Houthi militia's continuous launching of bomb-laden UAV to target civilians and civilian objects in the Kingdom systematically and deliberately, which is a flagrant violation of international humanitarian law and its customary rules.
The Cabinet was also briefed on reports and developments on local and international levels, reiterating the Kingdom's affirmation, before the Ministerial Meeting of the Non-Aligned Movement, on the importance of adhering to the basic principles of the Non-Aligned Movement in facing challenges and supporting all efforts exerted to achieve a stable and secure world, including the principles of the Bandung Conference in addressing conflicts, combating terrorism, renewable nuclear and other threats, climate change and its repercussions, and deepening multilateral cooperation that enhances international peace and security.
The Cabinet reviewed topics on its agenda, including some being co-studied by the Shura Council. The Cabinet was also briefed on the outcomes reached by the Economic and Development Affairs Council, the Political and Security Affairs Council, the General Committee of the Council of Ministers, and the Cabinet's Panel of Experts with regard to the agenda.
The Cabinet issued the following decisions:
First: The Cabinet authorized the Minister of Interior - or his deputy - to discuss and sign with the Senegalese side a draft memorandum of understanding for cooperation in the field of civil defense and civil protection between the Government of the Kingdom of Saudi Arabia and the Government of the Senegal Republic.
Second: The Cabinet authorized the President of Saudi Data and Artificial Intelligence Authority (SDAIA) - or his deputy - to discuss and sign with the International Telecommunication Union a draft memorandum of understanding for cooperation in the field of artificial intelligence between the Saudi Data and Artificial Intelligence Authority (SDAIA) of the Kingdom of Saudi Arabia and the International Telecommunication Union.
Third: The Cabinet approved to amend the name (Equestrian High Commission) to be (Saudi Arabian Equestrian Federation) and amending Article (4) of the authority's regulation issued by Cabinet Resolution No. (576) dated 9/5/1441 AH, related to the authority’s Board of Directors.
Fourth: The Cabinet approved adding of a representative of the Ministry of Human Resources and Social Development and the Saudi Data and AI Authority to the membership of the E-Commerce Council.
Fifth: The Cabinet approved of adopting the unified general system for real estate owners of the Cooperation Council for the Arab States of the Gulf regarding the management of neutral zone and building maintenance for a period of four years.
Sixth: The Cabinet approved a number of promotions on the 14th and 15th ranks.
The Cabinet was briefed on a number of issues on its agenda and took relevant recommendations.