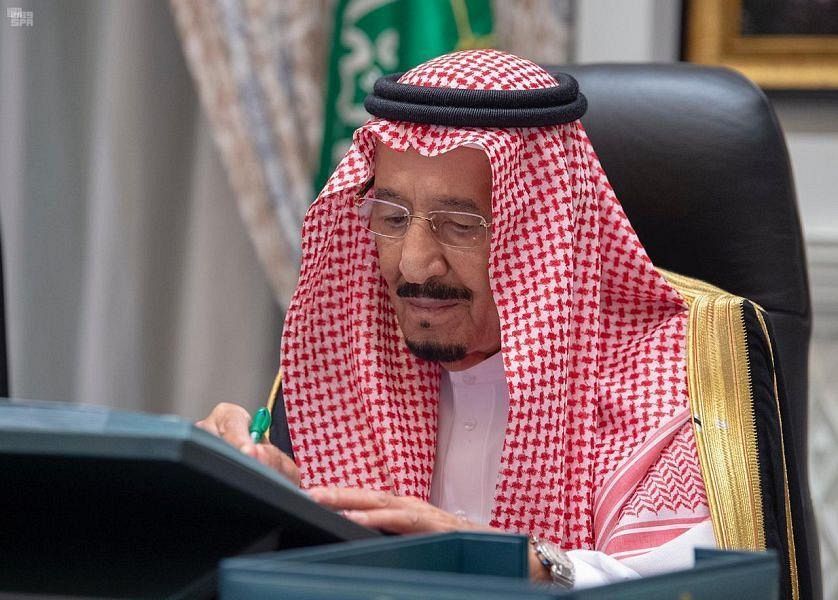 At the outset of the session, the Cabinet appreciated the contents
of the Custodian of the Two Holy Mosques' speech at the conclusion of
the Women 20 (W20). The speech confirmed that the G20, presided over by
the Kingdom of Saudi Arabia, has demonstrated its ability to lead
international efforts and joint work to combat the COVID-19 pandemic and
serve humanity. The speech drew attention to contain and fight the
spread of the pandemic, and to enhance the readiness of countries for a
bright future economy through comprehensive economic and social programs
for women, ensuring their participation in decision-making and
providing possible opportunities for success, and commitment to the
United Nations sustainable development goals related to women at the
international level.

The Cabinet indicated that the Custodian of the Two Holy Mosques
affirmed in his speech during the final communique of the Business 20
(B20) that many of the B20 priorities represent common pillars with the
current transformations in the Kingdom through its Vision 2030, and a
general goal of the Kingdom's presidency of the G20. The G20 has
committed to close the immediate financing gap in global health to face
the pandemic by pledging $21 billion to support the production and
distribution of diagnostics, treatments, therapeutics and vaccines for
all. It also injected around $11 trillion to protect the global economy,
in addition to suspending debt payments of $14 billion to the poorest
countries, as well as supporting the World Trade Organization reforms.

The Cabinet highlighted HRH the Crown Prince speech at the opening
of Global AI Summit, and its emphasis on the Kingdom's endeavor to
become a leading meeting place for the world, embracing artificial
intelligence and harnessing its capabilities and potentials for the good
of all humanity. The speech called to advance present and upcoming
generations, and cooperate to build knowledge economies, and bridge the
digital gap between the developed and the developing countries.

In a statement to Saudi Press Agency (SPA), Acting Minister of Media
Dr. Majid bin Abdullah Al-Qasabi stated that the Cabinet discussed the
Riyadh Initiative, which was launched during the G20 Anti-Corruption
Ministerial Meeting, aimed at establishing a global network of
operations for law enforcement authorities concerned with combating
corruption and strengthening frameworks of communication and exchange of
information and knowledge. The meeting affirmed its support in line
with the G20 anti-corruption action plan for the years 2019-2021, and
the high-level principles from the Kingdom's presidency of the G20
during 2020, represented in developing and implementing national
anti-corruption strategies.


The Cabinet followed up on the reports and developments of the
Coronavirus pandemic at the local and international levels, and the
Kingdom's contributions in relation to global research to reach a safe
vaccine, and to ensure that it is available as soon as its effectiveness
is fully confirmed. The Cabinet was briefed on the latest virus
statistics and related indicators, which showed a significant decrease
in the number of cases in general. The Cabinet stressed in this regard
that citizens and expatriates must continue to adhere to the application
of precautionary and preventive measures and not be complacent, in
light of a strong second wave of the in a number of countries.

The Cabinet reviewed the developments of events on the Arab,
regional and international arenas, reiterating the Kingdom's
confirmation during the High-level Meeting to Commemorate the
Seventy-fifth Anniversary of the United Nations, that it has been and
still is a mediator for peace to end numerous international conflicts
side by side with the United Nations and its various bodies and it is
continuing its tangible efforts, led by the Custodian of the Two Holy
Mosques, to continue its march to achieve stability, growth and peace in
the region and the world, confront terrorism, combat the Coronavirus
pandemic and its effects, and respond to calls for humanitarian aid
around the world.

Dr. Majid bin Abdullah Al-Qasabi stated that the Cabinet expressed
the Kingdom's aspiration that the signing of the Libyan joint military
commissions of a permanent ceasefire agreement in Libya, under the
auspices of the United Nations, would pave the way for the success of
the understandings on the political and economic tracks, to contribute
to the inauguration of a new era that achieves security, peace and
stability for Libya and its brotherly people.

The Cabinet discussed the Kingdom’s keenness to regulate everything
related to satellite systems, develop technologies for launching space
vehicles, work to enhance space security, and strengthen international
cooperation with the competent authorities in the field of space. The
Cabinet referred in this regard to the Kingdom’s call before the meeting
held at the United Nations on the peaceful use of outer space, for
concerted international efforts to lay the necessary foundations to
ensure that it is used for scientific and peaceful purposes, and to
confront the threat posed by space debris, and for states to implement
their activities in outer space responsibly.

The Cabinet renewed the Kingdom's rejection of any attempt to link
Islam and terrorism, its denunciation of the offensive cartoons of the
Prophet Muhammad (PBUH), or any of the messengers, condemnation and
rejection of any terrorist act or practices and actions that generate
hatred, violence and extremism, and the assertion that intellectual
freedom is a means of respect, tolerance and peace.


Dr. Al-Qasabi stated the Cabinet expressed the Kingdom's strong
condemnation of the Iranian-backed terrorist Houthi militia continues
attacks targeting civilian objects and civilians in the Kingdom, which
is a flagrant violation of international humanitarian law and its
customary rules.

The Cabinet expressed the Kingdom's strong condemnation and
denunciation of the terrorist bombing that targeted an educational
center west of the Afghan capital, Kabul, and resulted in dozens of
deaths and injuries, stressing that the Kingdom stands by the brotherly
Islamic Republic of Afghanistan against all forms of violence, terrorism
and extremism, and its rejection of these criminal acts.

The Cabinet reviewed topics on its agenda, including some being
co-studied by the Shura Council. The Cabinet was also briefed on the
outcomes reached by the Economic and Development Affairs Council, the
Political and Security Affairs Council, the General Committee of the
Council of Ministers, and the Cabinet's Experts Commission with regard
to the agenda.

The Cabinet issued the following decisions:

First: The Cabinet authorized the Minister of Tourism - or his
deputy - to discuss and sign with the Hungarian side a draft memorandum
of understanding for cooperation in the field of tourism between the
Ministry of Tourism of the Kingdom of Saudi Arabia and Hungarian Tourism
Agency.

Third: The Cabinet decided to abolish the General Authority for
Culture and its organization. The Ministry of Culture - and the bodies
established under Cabinet Resolution No. (398) dated 6/10/1441 AH -
shall assume the tasks and functions that were assigned to the
(canceled) General Authority for Culture.

Fourth: The Cabinet approved to allocate SR 500,000 to the family of
the health practitioner who lost his/her life due to COVID-19 in the
government or private sectors, whether civil or military and Saudi or
non-Saudi, provided that this applies as of the date of reported the
first infection with the virus on 7/7/1441 H.

Fifth: The Cabinet approved a number of promotions at the 14th and 15th ranks.

The Cabinet was briefed on a number of issues on its agenda and took relevant recommendations.