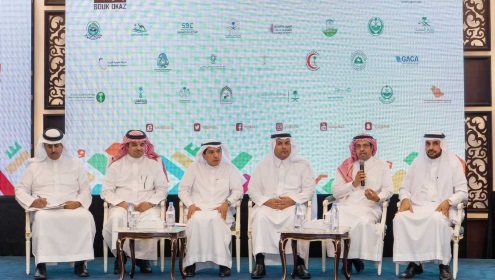 500 volunteers, 8000 workers will be deployed at Souk Okaz

Extensive arrangements are being made by the Saudi Commission for Tourism and National Heritage (SCTNH) in preparation for the 12th edition of Souk Okaz to be held on the market site at Taif Governorate from June 27 to July 13.
Egypt will be the guest-of-honor at the annual event, which is to be held under the patronage Custodian of the Two Holy Mosques King Salman.
The two weeks event will draw the participation of 500 volunteers from the youths in Taif and there will be 8000 workers attached to various stalls and facilities in the market place. The fair will also provide 1,000 temporary jobs for local youths.
A press conference was held in Taif to make the important announcements of the event. Those who were present at the press briefing included, Saad Al-Maimouni, Governor of Taif, Dr. Hossam Zaman, President of Taif University, Eng. Ahmad Al-Mazyad, Executive Director of the General Authority for Culture, And the supervisor of the Agency of Ministry of Information for Cultural Affairs, Abdullah Kanani, Vice President of Marketing and Programs at the Saudi Commission for Tourism and National Heritage, Abdullah Al-Marshed, and the Director of Souk Okaz Market Abdullah Al-Sawat.
Taif Governor Al-Maimouni appreciated the support and interest of Makkah Governor Prince Khalid Al Faisal, Advisor to the Custodian of the Two Holy Mosques and also thanked Prince Sultan bin Salman, President of the Saudi Commission for Tourism and National Heritage, Chairman of the Supreme Supervisory Committee of Souk Okaz, for his direct and constant follow-up to the market and his interest in the participation and attendance of all government agencies and the local community in this major national event.
He stressed the readiness of Taif governorate with all its governmental and security agencies for this important national occasion, which will be attended by thousands of people from all parts of  Saudi Arabia and even from Gulf countries, noting that the preparations in partnership with the Saudi Commission for Tourism and Heritage started early and everyone works in the spirit of one team to make this important event a success.
The cultural program will include the participation of a number of Arab intellectuals, writers and poets. It includes (10) cultural seminars, eight workshops, three poetry evenings, a competition for theatrical performance, and a competition for folk arts.
The General Authority for Culture is organizing Okaz Cultural Boulevard, which includes Cultural Tent, Exhibition of pieces winning of Souk Okaz Awards and Competitions, Arabic Calligraphy Exhibition, Plastic Arts Exhibition, Souk Okaz Theatrical Performance Competition, Okaz Colors and Photography show, the art oasis with a 400-meter-long Mural and sculptural skills. The participation of Egyptian Opera House in several concerts on Souk Okaz Theatre was also announced.
The MBC group will organize the opening ceremony, which will include an artistic work that describes the historical sequence of Souk Okaz and highlights its historical, cultural and economic role.
Heritage Boulevard in this year's edition will witness more than (150) different activities that include a number of cultural and heritage events, theatre performances, in addition to crafts and handicrafts events. The new program of this year will  include presentations of life stories  of the poets of the Okaz market (Amar bin Kalthoum, Antra bin Shaddad, Zuhair bin Abi Salma, Emru’lQais, Tarfabin al Abd, Al Aa'sha and Qaisbin Sa’aeda), along with trade convoys (Sham, Yemen), and the "Zad" play for sale and purchase offers.
The programs will also include the activities of camel caravans and Arabian horses, the Equestrian School for children, " Okaz Chivalry", camel racing  shows, poets’ shows on camels, and "Okaz boys' events" which include Okaz Studio for Children, interactive shows for children, in addition to Mu’lkat Show (Long poems Show), Arabic Paintings shows, historical Photography shows, craftsmen events from all over the Kingdom, sound shows, interactive screens, Okaz tent, Arabic calligraphy tent, Okaz color gallery, cultural tent, equestrian school, and virtual museum of the masterpieces of artefacts discovered in the Kingdom.