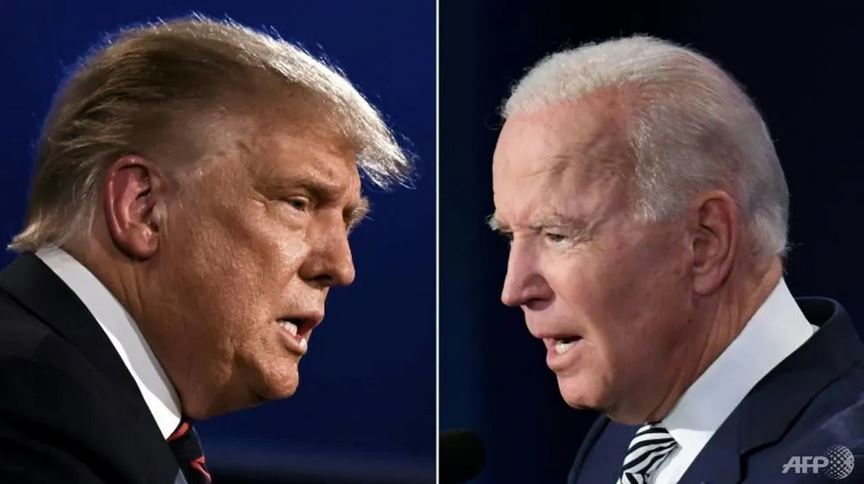 US President Donald Trump and former vice president Joe Biden will debate in the southern city of Nashville as part of the final sprint to the Nov 3 election. (Photos: AFP/Jim Watson, Saul Loeb)
NASHVILLE - AFP

Trump and Biden to square off in final debate

President Donald Trump squares off against Democratic challenger Joe Biden on Thursday (Oct 22) in what promises to be a bruising final debate with less than two weeks left in their turbulent fight for the White House.

The pair's last televised showdown spiraled into an ugly confrontation marred by interruptions and name calling, prompting organizers to introduce mic-muting this time to try to keep things civil.

The debate in the southern city of Nashville fires the starting gun on the final sprint to the Nov 3 election in a deeply polarized and tense United States fearful the results will set off court battles and more protests.

Trump has stepped up his attacks on Biden, who national polls show leading the race, as he fights to hold on to the White House after four tumultuous years.

To cut down on the interruptions that marked the last debate, during the two minutes the candidates have to respond to the moderator's questions only their mic will be live.

"I think the mute is very unfair and I think it's very bad," Trump said this week, branding debate moderator Kristen Welker a "radical Democrat".

Biden, 77, had no public events on his schedule on Wednesday for the third day in a row, as the 74-year-old Trump has been hitting multiple rallies per day.

Barack Obama was stumping for his former vice president on Wednesday, urging Democrats to not be lulled into complacency by Biden's lead in the polls.

He issued a stark reminder of 2016, when surveys showed Hillary Clinton as the clear favorite - only for her and her supporters to be shocked by a Trump victory on election day.

"We can't be complacent. I don't care about the polls," the former two-term president told a drive-in rally in Philadelphia, Pennsylvania, one of a handful of battleground states expected to decide the election.

He told supporters that too much was at stake to have four more years of Trump leading the nation, seeking to contrast his successor - a real estate mogul and ex-reality TV star - with Biden.

"And the rest of us have had to live with the consequences of him proving himself incapable of taking the job seriously."

The coronavirus has killed more than 220,000 people in the US and seriously wounded the world's largest economy, prompting fierce criticism of the president's handling of the crisis.

While Obama was in Pennsylvania, Trump visited North Carolina, another of the battleground states, as he seeks to recapture the enthusiasm of four years ago.

Trump's message has included telling Americans that the coronavirus outbreak is practically over and attacks on the business dealings of Biden's son, Hunter, while his father was vice president.

A Quinnipiac University poll of likely voters released on Wednesday gave Biden a 51 to 43 lead in Pennsylvania, which Trump won by a narrow margin in 2016.

Trump is trailing Biden in the national polls and another Quinnipiac poll spelled potential trouble for his reelection hopes.

The poll had the Democratic and Republican presidential candidates in a 47 to 47 dead heat in Texas, a state which Trump won by nine points four years ago and which hasn't voted for a Democrat since Jimmy Carter in 1976.

More than 40 million Americans have already voted, according to the US Elections Project of the University of Florida, nearly 30 per cent of the total turnout in 2016.