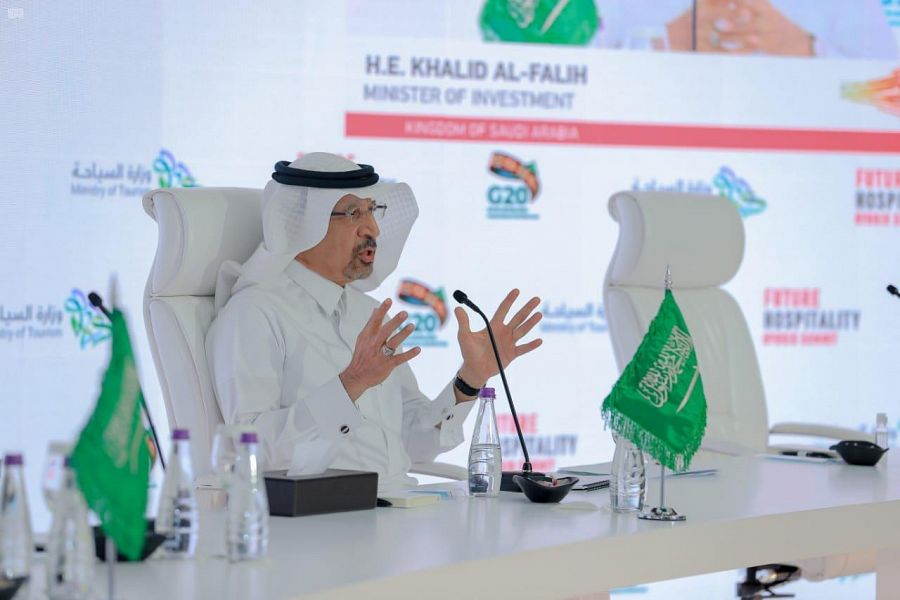 Minister of Investment Eng. Khalid bin Abdulaziz Al-Faleh lauded
exchange of visions and ideas among a group of leading global leaders
and executives, interested in the domains of tourism, hospitality and
investment, over the rich investment scene the Kingdom of Saudi Arabia
entertains.

This was unfolded, during a discussion panel, in the 2-day Future of
Hospitality Summit, organized by the Ministry of Tourism, to mark the
current Saudi Arabia's presidency of the G20.

Saudi Arabia as a member of the G20, entertains an economy with a
robust private sector as well as a world class vigorous banking system,
in addition to a vivid contingency fund for national development that
provides funding as a backup to the process, Al-Faleh stated, adding
that transformation endeavor, across the Kingdom, is led by young
generations, comprising males and females, with excellent educational
backgrounds and well-versed knowledge, in addition to a zeal to work
with investors.

He pointed out that the Kingdom record, in terms of investment, is
fairly pretty well as it is full of achievements, reminding that the
Kingdom is overtly open to investment, since the 30s of the previous
century and indicating that the ministry of investment is the main gate
(the portal) for investors coming to the Kingdom as it interconnects the
investors with the pertinent departments, all over the Kingdom, as well
as facilitating their tasks.

It is also, he explained, ready to meet their investment needs,
pointing to the transformation trip witnessed, in the Kingdom to realize
Vision 2030, and its great appeal to the visitors and investors, as
well, and their increased anticipations to embark on such unique
experiments, as the Kingdom furnish unprecedented opportunities to them,
within a state which is powerfully rich, with a diverse culture and
rapidly transforming towards realization of the Kingdom Vision 2030.