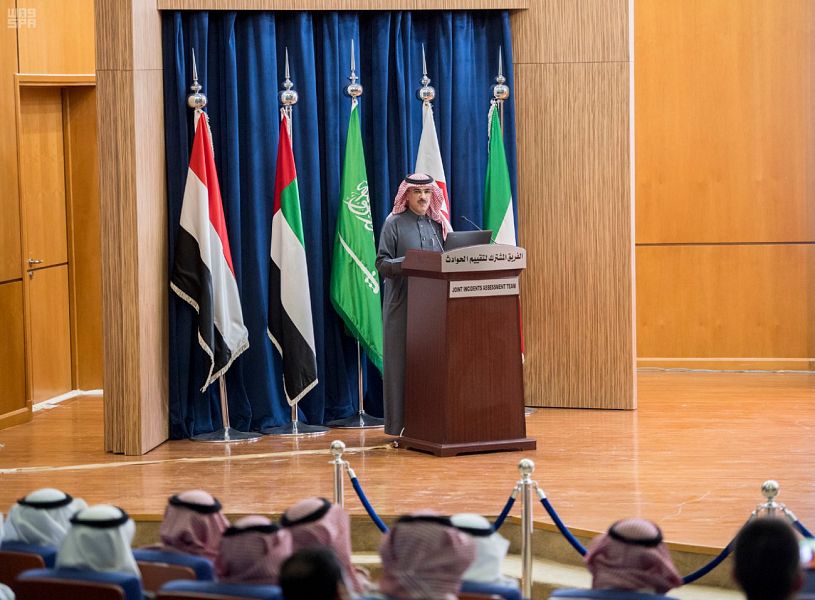 The official spokesman of the Joint Incident Assessment Team (JIAT) in Yemen Legal Counsellor Mansour Al-Mansour held here today a press conference disclosing results reached by JIAT regarding four allegations reported by governmental and non-governmental international organizations and media, affirming the safety of all procedures followed by the Coalition Forces.

Regarding the Review of an operation carried out by Coalition Naval Forces off the port of (Al-Khawkha). According to the review conducted by the Coalition Forces regarding a mission carried out by one of the Coalition ship on Friday, September 14th, 2018. The Joint Incidents Assessment Team (JIAT) reviewed the facts related to the mission and following the verification of all related documents; including coalition's Naval Rules of Engagement, the Field Inspection of the Coalition ship, the Operational Records and Logistics Records of that ship, and the interview of the commander of the Coalition ship and operations and arming officers. JIAT also studied the area of operations and sources of threats on the day of the mission and the intelligence reports and warning publications. JIAT found that on Friday, September 14th, 2018 the coalition naval ship was assigned to escort a convoy of three Saudi merchant ships. At approximately 6:00 pm, in the area of operations off the port of (Al-Khawkha), an un-identified boat approached the convoy at high speed coming from the Yemeni coast side. The protection ship applied the Rules of Engagement of the Coalition Forces by warning the boat via loudspeakers. When the boat did not respond to repeated warnings, warning shots were fired. Nevertheless, the boat ignored the warnings and continued to approach the convoy. When the boat was in a distance that was considered dangerous to the safety of the convoy, the Coalition ship shot on the boat. Furthermore, the boat exploded. The Coalition ship continued escorting the convoy. After the completion of the escort mission and ensuring the safety of the convoy, the escort ship went back to the incident location and carried out a search and rescue operation of the target boat at approximately 6:45 pm but none were found. After studying all data regarding the operation and reviewing all the documents, JIAT reached the following findings:

1- The Coalition ship identified the boat to be a hostile (boat) located in the Area of Military Operations, which failed to respond to the warnings and continued to move at high speed and proximity to a distance that represented danger to Military ship and commercial ships, according to Rule (7) and (16) in Customary International Humanitarian Law.

3- The process of targeting the boat was based on the right of legitimate self-defense provided according to Article (51) of the Charter of the United Nations and Article (90/e) of the San Remo Manual on International Law Applicable to Armed Conflicts at Sea.

4- The targeting of the (boat) was considered "Military Necessity" because the boat posed an immediate threat to Commercial vessels and Military ship and was considered to be a legitimate hostile target, by approaching the convoy at high speed and did not respond to multiple warnings of stopping or retreating by the military ship.

5- The mission executed by the coalition ship was to ensure the safety of the maritime navigation of the commercial convoy Applying Article (40) of the San Remo Manual on International Law Applicable to Armed Conflicts at Sea.

6- The coalition ship applied Article (18) of the Second Geneva Convention in International Humanitarian Law regarding the implementation of the search and rescue operation by returning of the ship to the site of the boat within one hour after the attack and conducting a search and rescue mission. 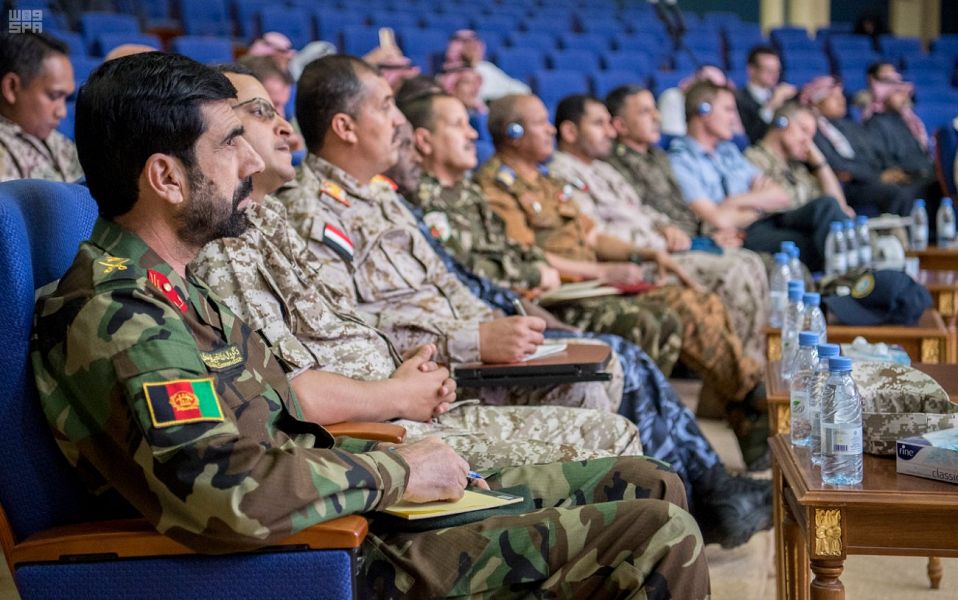 In light of that, JIAT found that the mission executed by coalition ship was in accordance with the Customary International Humanitarian Law.

Regarding the allegation that the Coalition Air Forces bombed the Medicins Sans Frontiers's (MSF) (Cholera Treatment Center) in (Abs) city, (Hajjah) governorate. Regarding the statement by MSF on June 13th 2018, that Coalition Forces bombed the (Cholera Treatment Center) on June 11th 2018. Stating "On the morning of Monday June 11, 2018, the Cholera Treatment Center of MSF was bombarded in (Abs) city, (Hajjah) governorate by the Coalition Air Forces, Which threatened the safety of our crew, and would like to stop any military operations so that our staff can access the site and assess the damages." The Joint Incident Assessment Team (JIAT) has vetted the incident, and following verification of all related documents; including the Daily Mission Schedule, After Mission Reports, Video of the mission carried out, and the statements of those involved in the military operation carried out by the Coalition Forces at the time and place of the allegation, procedures and Rules of Engagement, coalition's (No Strike List), Messages on (plans and timing of the organization's field movements), the meeting with a delegation from (MSF). JIAT also evaluated the actions taken to verify the information that was related on in targeting process, including the assessment of the reliability of the intelligence sources. JIAT found that based on intelligence from inside of Yemen, a warehouse was used by the armed Houthi militia as a storehouse for weapons and ammunition (rockets, medium arms and ammunition). The warehouse is located in an isolated area, (50) kilometers away from Saudi Arabia International Border which bosses a threat to Saudi Arabia. Thus, according to Article (52/2) of Additional Protocol I to the Geneva Conventions, the warehouse was considered at the time to be a legitimate military target, which in its destruction is a military advantage. Therefore, at (5:45 am) on Monday June 11th, 2018 the Coalition Air Forces carried out an air mission on an arms and ammunition storage using one guided bomb that directly hit its target. JIAT examined the video of the mission and after analyzing images received from MSF and comparing information and data with the organization's messages about their location and stages of movement, JIAT found that:

1- The warehouse is in the north of (Abs) city, (Hajjah) governorate, about (50) km away from the international borders of Saudi Arabia, outside the urban area in an isolated area under the Armed Houthi Militias control.

3- MSF mentioned that its last presence on the site was on June 9th 2018, two days prior to the incident, and their presence in site was to transfer a cargo of equipment. Referring to the moves incoming messages from the organization to the evacuation and humanitarian operations unit, JIAT did not find any request to secure movements of the organization in that area on June 9th, 2018.

4- JIAT examined all the available evidence regarding the military operation carried out by the Coalition Air Forces, and It became clear that the mission was based on information from a source inside Yemen, and that it did not complete the necessary procedures used by the Coalition Forces.

5- JIAT reviewed the satellite imagery of the site on December 1st , 2017, and on April 3rd , 2018, (before the mission), and it was not clear to JIAT that there were any signs of distinction (Medical Facility) on the roof of the warehouses nor on the roof of buildings inside the complex (Industrial Technical Institute) in (Abs) city, (Hajjah) governorate. This is a violation to Article (5) of Chapter II of the Annex to Additional Protocol I of the Geneva Conventions.

6- By reviewing the video of the mission carried out JIAT found that:

B- The target area was free from any movement of (civilian and vehicles) prior and during the operation.

C- One guided bomb was used which hit its target directly.

D- No damage was found on warehouses close to the target.

7- JIAT reviewed the satellite imagery of the operation on June 30, 2018, (19) days after the date of targeting, JIAT found that:

A- Two (Medical Facility) signs are over two warehouses next to the targeted warehouse.

B- No major damages on the warehouses and buildings adjacent to the site.

8- MSF did not inform the Coalition Forces that the alleged warehouse was a facility of the organization to be included in the (no-strike list), which violates Article 12 (3) of Additional Protocol I to the Geneva Conventions. Nevertheless, MSF stated that the building was a point of movement for a period of time that ended before the executed mission.

9- Due to the urgency in carrying out the task and not completing the procedures by the Coalition Forces intelligence, the targeting of the building was an unintended error. 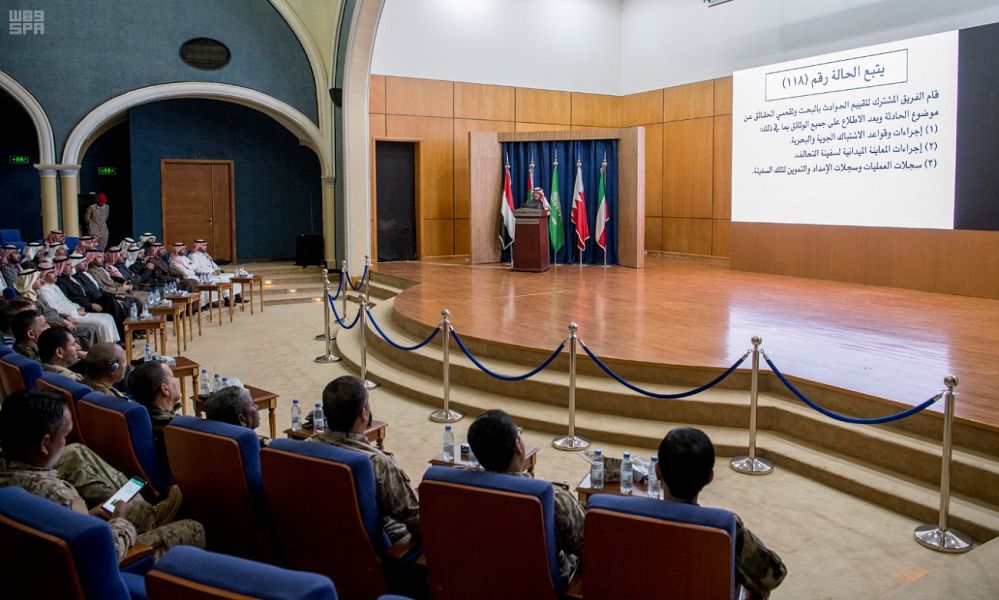 In light of that, JIAT recommends that:

A- Coalition States provide voluntary assistance for physical damages to the warehouse.

B- Taking legal procedures against those responsible for the urgency in carrying out the mission, which resulted from a procedural error and not to complete the necessary procedures by the Coalition Forces intelligence.

C- emphasize the International organizations to notifying Coalition Forces of their locations in a clear and accurate manner as well as notification of their movements.

Regarding the alleged targeting of a fishing boat in the south (Mocha), (Taiz) governorate. Regarding the report of the International Committee Of The Red Cross (ICRC) Regional Mission concerning the targeting of a fishing boat by the Coalition Forces on January 9th, 2017 which was sailing towards (Djibouti) and arrived south of (Mocha) at approximately (12:00 pm) when it was targeted, which caused killing 11 civilians. The wreckage of the boat was found nearby the new coast and inside it the bodies, while other bodies were found scattered along the coast in (Mochaabah). JIAT has vetted the possibility of the incident and following verification of all related documents; including the Procedures and Rules of Engagement of the Coalition Forces, the Daily Naval Mission Schedule including its helicopters, the operational records and the logistics records of the Coalition vessels in the south of the Red Sea. JIAT also examined the map of the deployment of coalition ships and their locations in their areas of operation. JIAT found that Coalition Naval Forces including helicopters attached to some of them did not carry out any targeting in the date of the allegation January 9th, 2017. The only maritime activity on January 9th, 2017 was the inspection of four boats and a commercial vessel in the area of maritime operations, approximately (90) nautical miles away from the new coast south of (Mocha) (the place of the claim). By reviewing coalition Naval Missions on Sunday January 8th , 2017 the day before the date mentioned in the claim, JIAT found that the Coalition Forces did not conduct any targeting. By reviewing coalition Naval Missions on Tuesday, January 10, 2017, the day following the date of the allegation JIAT found that the Coalition Forces did not conduct any targeting. In light of that, JIAT found that the Coalition Forces are not responsible for targeting the claimed fishing boat south of (Mocha), (Taiz) governorate.