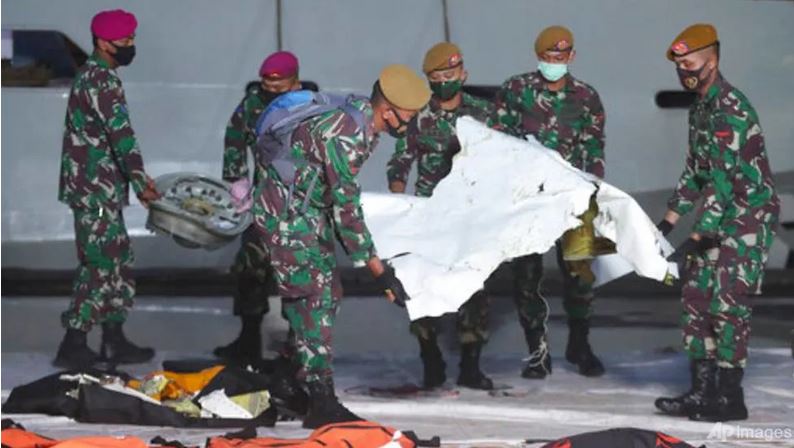 An aerial search for victims and wreckage of a crashed Indonesian plane expanded on Thursday (Jan 14) as divers continued combing the debris-littered seabed looking for the cockpit voice recorder from the lost Sriwijaya Air jet.

The National Search and Rescue Agency had temporarily suspended the search for the second black box on Wednesday due to bad weather and waves up to 5m high. The divers returned to the water several hours later.

The Boeing 737-500 disappeared on Saturday minutes after taking off from Jakarta with 62 people aboard. The other black box containing flight data was recovered on Tuesday, and the hundreds of search personnel have also recovered plane parts and human remains from the Java Sea.

The aerial search is being expanded to coastal areas of the Thousand Islands chain “because plane debris and victims may be carried away by sea currents”, said Rasman, the agency’s search and rescue mission coordinator who goes by a single name.

Navy officials have said the two black boxes were buried in seabed mud under tons of wreckage between Lancang and Laki islands in the Thousand Island chain north of Jakarta. At least 268 divers were deployed on Thursday, almost double the previous figure.

So far, the searchers have sent 141 body bags containing human remains to police identification experts. Families have been providing DNA samples to the disaster victim identification unit, which on Wednesday said it had identified six victims, including a flight attendant and an off-duty pilot.

The airline’s data showed both pilots in command of the plane were highly experienced and had relatively good safety records.

Captain Afwan, who goes by one name, began his career as an air force Hercules pilot and had several decades of flying experience. He was known to his relatives and friends as a devout Muslim and preacher. Afwan’s co-pilot, Diego Mamahit, was equally qualified.

Nurcahyo Utomo, an investigator with Indonesia’s National Transportation Safety Committee, known by its Indonesian acronym as KNKT, said the crew did not declare an emergency or report technical problems before the plane nosedived into the sea.

He said investigators are now working to read critical details on the flight data recorder that was salvaged earlier and tracks electronic information such as airspeed, altitude and vertical acceleration.

KNKT chairman Soerjanto Tjahjono said the plane continued to transmit data as it fell from an altitude of nearly 11,000ft (3,352m) to as low as 250ft (7.6m), citing findings from a radar data investigation.

Tjahjono also said a broken fan blade still attached on its turbine disc has been among the debris found, and that “the damaged fan blade indicates that the engine was still functioning during the impact”.

Investigators and experts from the US National Transportation Safety Board, the jet engine producer General Electric and Boeing will be joining the investigation in the next few days.

Indonesia’s aviation industry grew quickly after the nation’s economy was opened following the fall of dictator Suharto in the late 1990s. Safety concerns led the United States and the European Union to ban Indonesian carriers for years, but the bans have since been lifted due to better compliance with international aviation standards.