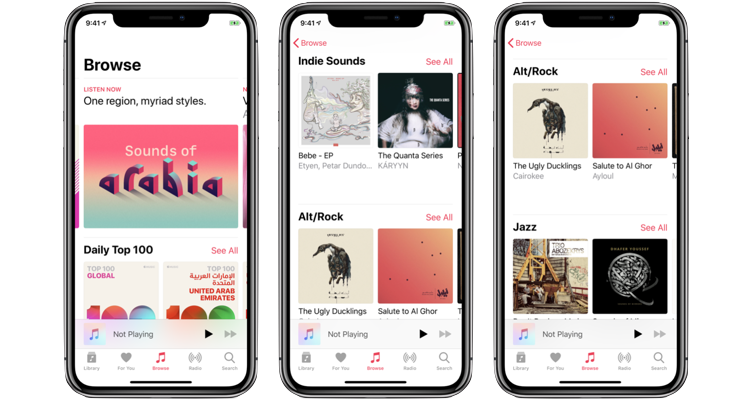 Apple Music, the world’s fastest growing streaming service and app has grown its catalogue in the Middle East to offer subscribers over 50 million songs available across seven storefronts.

To celebrate this milestone the platform announced the launch of a new destination "Sounds of Arabia” where subscribers can explore a collection of genres from the Middle East curated by local  experts that are culturally aware and able to add their own personal touch with each collection.  Through the launch of Sounds of Arabia, Apple Music is aiming at elevating the Arabic music offerings which currently experiencing a major shift with more creativity and fusion projects mixing eastern music and international genres along with a state of the art presentation.

Sounds of Arabia is a tribute to all the creative projects and underground scene that is pretty popular in the region, while their music transcends borders and speaks to audiences around the world, such as the Jordanian band Ayloul who are merging their Arabic roots and rousing indie rock and Yuma, the Tunisian duo who are celebrating the Tunisian folk with a modern twist.

With passion about unearthing the very best in Middle Eastern talents, Apple Music is giving local artists a global platform by taking their music to a global audience with unique featuring and editorial support, such as featuring 47Soul, the Jordanian Palestinian electronic music group and the Egyptian rock band Cairokee in different international storefronts. Additionally, promoting the music of the Kuwaiti Hip-Hop duo ’Sons of Yusuf’ and Syrian rapper Moh Flow on Ebro Darden’s show on Apple Music’s global livestream, Beats1.

With over 50 million songs, Apple Music offers all the latest international hits, plus a huge catalogue from all the greats, easily accessed via our artist Essential Playlists. In addition, Apple Music offers a plethora of music from across the Middle East, encompassing different genres and styles from Khaleej, Magrabi, Arabic Pop - Masri and Lebnani, Dabke, Jalsat to contemporary Arabic hip-hop - all in one place.