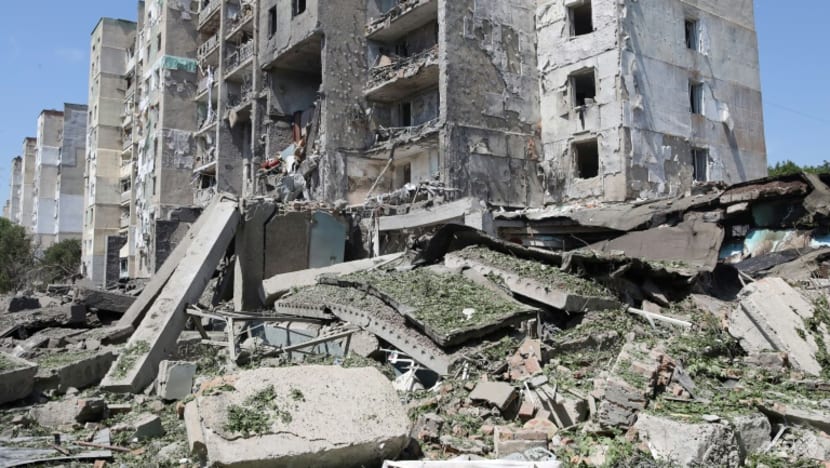 'Colossal' work ahead, as Ukraine recovery meet to open in Switzerland

Ukrainian President Volodymyr Zelenskyy warned of the "colossal" work ahead as leaders from dozens of countries and organisations gathered in Switzerland Monday to hash out a "Marshall Plan" to rebuild his war-torn country.

Zelenskyy, who is due to deliver a video address to the conference when it opens Monday afternoon, stressed Sunday the towering challenges that recovering from the devastation wrought since Russia launched its full-scale invasion on Feb 24.

"The volume of the works on already liberated territories is really colossal," he said.

"And we will have to free over 2,000 villages and towns in the east and south of Ukraine."

The two-day conference, held under tight security in the picturesque southern Swiss city of Lugano, had been planned well before the invasion, and had originally been slated to discuss reforms in Ukraine before being repurposed to focus on reconstruction.

As billions of dollars in aid flows into Ukraine, however, lingering concerns about widespread corruption in the country mean far-reaching reforms remain in focus and will be a condition for any recovery plan decided here.

Lugano is not a pledging conference, but will instead attempt to lay out the principles and priorities for a rebuilding process aimed to begin even as the war rages.

Ukraine's ambassador to Switzerland Artem Rybchenko said ahead of the conference that it would help create "the roadmap" to his country's recovery.

While Zelenskyy was unable to leave Ukraine to co-host the event with his Swiss counterpart Ignazio Cassis, Prime Minister Denys Shmyhal made a rare trip out of the country since the war began to attend.

Five other government ministers were also among the around 100 Ukrainians who made the journey, although Foreign Minister Dmytro Kuleba reportedly had to cancel at the last moment due to illness.

In all, around 1,000 people were scheduled to participate in the conference, including European Commission President Ursula von der Leyen, and the prime ministers of the Czech Republic, Poland and Lithuania.

Questions have been raised about the value of discussing reconstruction when there is no end in sight to the war.

But Robert Mardini, director-general of the International Committee of the Red Cross, stressed the importance to give "a positive perspective" to Ukrainians who have lost everything and are "struggling with anxiety and uncertainty for the future".

Others stress the need to begin laying the groundwork well in advance, as was done with the wildly successful Marshall Plan, a US initiative that pumped vast sums in foreign aid into Western Europe to help the continent rebuild and recover after World War II.

The task is daunting.

Rebuilding Ukraine, which has already seen devastating destruction, is expected to cost hundreds of billions of dollars.

Kyiv School of Economics (KSE) has estimated the damage done so far to buildings and infrastructure at nearly US$104 billion, and that Ukraine's economy has already suffered losses of up to US$600 billion.

Simon Pidoux, the Swiss ambassador in charge of the conference, said that it was too early to try to estimate all the needs, insisting Lugano instead should provide "a compass" for the work ahead.

"I think the effort will last for years, if not decades," he said.

Despite not being a donor conference, some participants are expected to make new pledges and propose frameworks for providing more funds.

The European Investment Bank will propose the creation of a new Ukraine trust fund, which with investments from EU and non-EU states could eventually swell to 100 billion euros, according to sources familiar with the draft plans.

The proposal, which is due to be announced Monday, aims to create a platform able to generate investment towards reconstruction, and also towards Ukraine's EU accession goals, they said.

The Lugano recovery and development plan will lay out reconstruction needs in terms of damaged and destroyed infrastructure and the devastated economy, but also its environmental recovery and social recovery needs.

In an effort to push decision-makers to opt for building back Ukraine's power grid with renewables, Greenpeace and 45 Ukrainian NGOs erected a giant replica wind turbine close to the conference venue.

Natalia Gozak, head of Kyiv-based Ecoaction, insisted "Ukraine should not rebuild its infrastructure to the old Soviet standards," known for dirty coal and the Chernobyl nuclear catastrophe.

"We cannot afford to plan it wrong from the start."