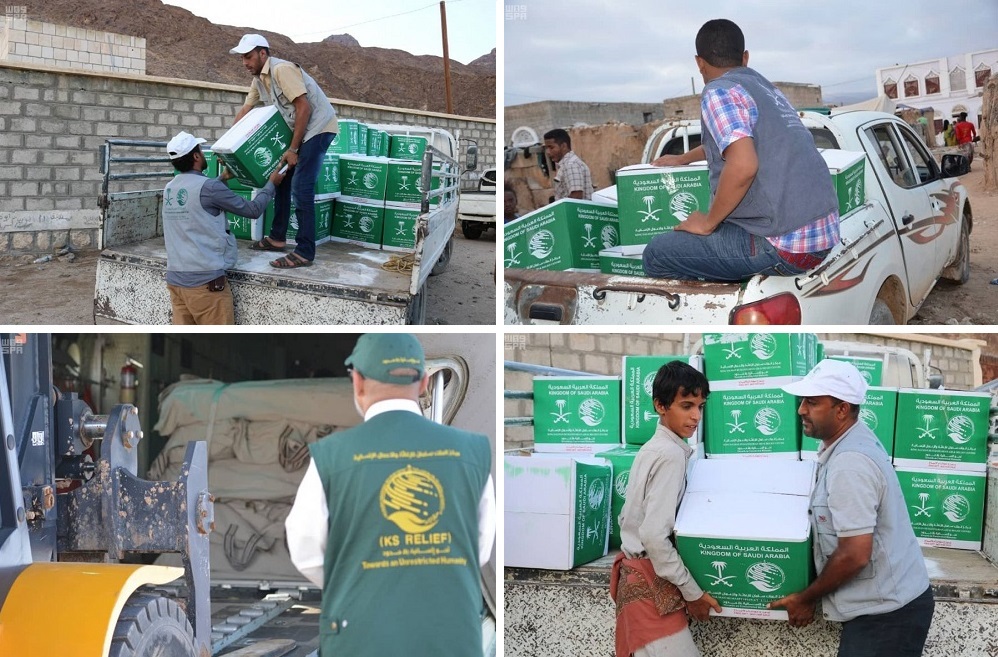 King Salman Humanitarian Aid and Relief Center (KSRelief) distributed 56 tons and 240 kg of emergency food aid to the displaced, lodged in schools and besieged areas, in the districts of Al-Maseela and Al-Ghda, affected by hurricane Laban, which has, recently, hit the governorate Al-Mahra, in Yemeni.
It is worth mentioning that the KSRelief Center had previously sent an airlift and land aid to Al-Mahra governorate, which included 867 tents, 13,591 blankets, 1,953 mattresses, 3,914 food baskets weighing 289 tons and 636 kilograms, respectively, as part of the ongoing support provided by the Kingdom represented by
KSRelief to help the victims of hurricane Laban.
KSrelief also distributed 75 tons and 720 kg of food baskets, in Hajjah governorate of Yemen, benefiting 6,438 people, 45 tons of emergency food aid in in Rahba district in Marib governorate, benefiting 3,600 people and 45 tons of emergency food aid and 480 blankets to displaced people in schools and affected areas by hurricane "Laban" in Masila and Sihout of Yemeni province of Al-Mahra.
KSRelief's Relief Flights Continues to Deliver Aid to Victims of Hurricane "Laban"; the planes of the relief airlift of KSRelief have continued arriving at the affected areas of the Yemeni province of Al-Mahra to assist the victims of hurricane "Laban.
The distribution comes within the framework of humanitarian projects being provided by the Kingdom of Saudi Arabia represented by KSrelief for the Yemeni people, which have so far reached 286 projects and as part of the continuous support provided by the Kingdom of Saudi Arabia represented by the Center to the brothers in Yemen.