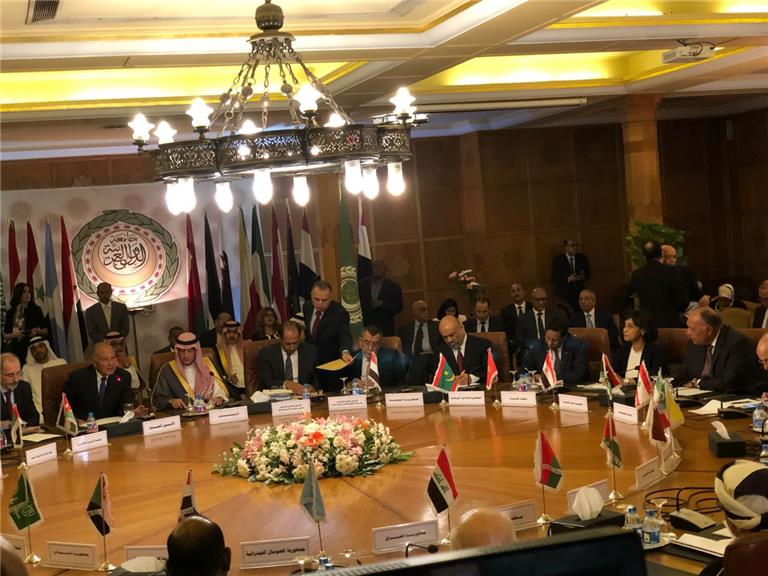 Council of the Arab League (AL) expressed here today thanks to and
appreciation of Riyadh-based King Salman Humanitarian Aid and Relief
Centre (KSrelief) for the role, it plays, in Yemen and the recent
undertaking that worth $40 million named Masam, for mine clearance
project.

This came, in the context of a resolution entitled "Developments of
the situation, in Yemen" issued by the 150th ordinary session of the AL
council, held at the level of Arab foreign ministers, and headed by
Sudan.

The council expressed thanks to and appreciation of Kuwait for
fulfilling its full commitments, at the Geneva Conference, to support
the humanitarian situation, in Yemen, for the current year, in the
amount of $250million.

It also thanked Kuwait for its role in hosting the Yemeni political
process and supporting efforts to achieve a comprehensive peace and
sustainable development, in Yemen, on the basis of the three agreed upon
terms of reference.

Commended the role played by the United Arab Emirates, in supporting
relief, humanitarian assistance programs and rehabilitating the
infrastructure and services in the liberated areas, in Yemen, the
council hailed also assistance and support provided to Yemen from Egypt,
Algeria, Sudan, Djibouti and Jordan.

The ministers reaffirmed the continued support of the constitutional
legitimacy, in Yemen, headed by President Abdu Rabbo Mansour Hadi and
supported the measures taken by the legitimate government aimed at
normalizing the situation, ending the coup and restoring security and
stability to all Yemeni governorates and stressed the commitment to
preserve Yemen's unity, sovereignty, independence and territorial
integrity.

Arab foreign ministers supported the position of the Yemeni
government and its adherence to the three terms of reference, the GCC
initiative and its executive mechanism, the outcomes of the
comprehensive national dialogue and the UN Security Council Resolution
No. 2216 and related international resolutions as the basis for reaching
a comprehensive political settlement, in Yemen.

Yemeni government welcomed the proposals made by the international
envoy to keep the port of Hodeida out of the control of the Houthi
militias, in order to ensure that the revenues of the port are not
diverted for the purpose of financing and directing the war, and in
order to pay salaries and meet the needs of citizens, denouncing
rejection of the Houthi coup for any of these proposals and indifference
to the critical humanitarian conditions the Yemenis undergo.

They condemned the Houthi's intransigence and refusal to attend
consultation session called for by the UN Secretary-General's envoy, in
Geneva, on September 6, at a time when the Yemeni government was
committed to attending and dealing positively with the path of peace and
state restoration, in Yemen.


The Arab Foreign Ministers condemned all human rights violations
committed by the Houthi militia, affirming the support of the Yemeni
government's efforts to combat extremism and terrorism.

They pointed out that the Houthi militias provided the suitable
environment for the spread of terrorist deviant organizations,
condemning the Iranian support for the Houthis which undermined the
efforts to return to the political process and impeded the international
efforts to stop violence, terrorism and war in Yemen.

The ministers added that the Houthis are firing rockets at
neighboring countries and threatening the international shipping in Bab
al-Mandab Strait and the Red Sea, rejecting the allegations contained in
the report of the UN Panel of Experts on Yemen issued on 28 August.

They deplored the fact that the UN Panel of Experts has assumed full
responsibility for both the legitimate government in Yemen and the
countries of the Coalition to Restore Legitimacy in Yemen on the
conflict in Yemen while the report ignored the real causes of the
conflict represented in the Iran-backed Houthi militias coup, the
Iranian negative role and its interference which prolonged the conflict
in Yemen.

The Arab Foreign Ministers called upon the Special Envoy of the
Secretary-General of the United Nations to mount much pressure on the
Houthi militia coupists to release prisoners, detainees, abductees,
political prisoners, journalists and activists immediately and
unconditionally.

The Arab ministers expressed their condemnation of planting mines by
the Houthi militias in the waterway and targeting of commercial ships
and oil tankers, which almost caused an environmental disaster,
stressing that the security of the Red Sea is an integral part of the
Arab national security.