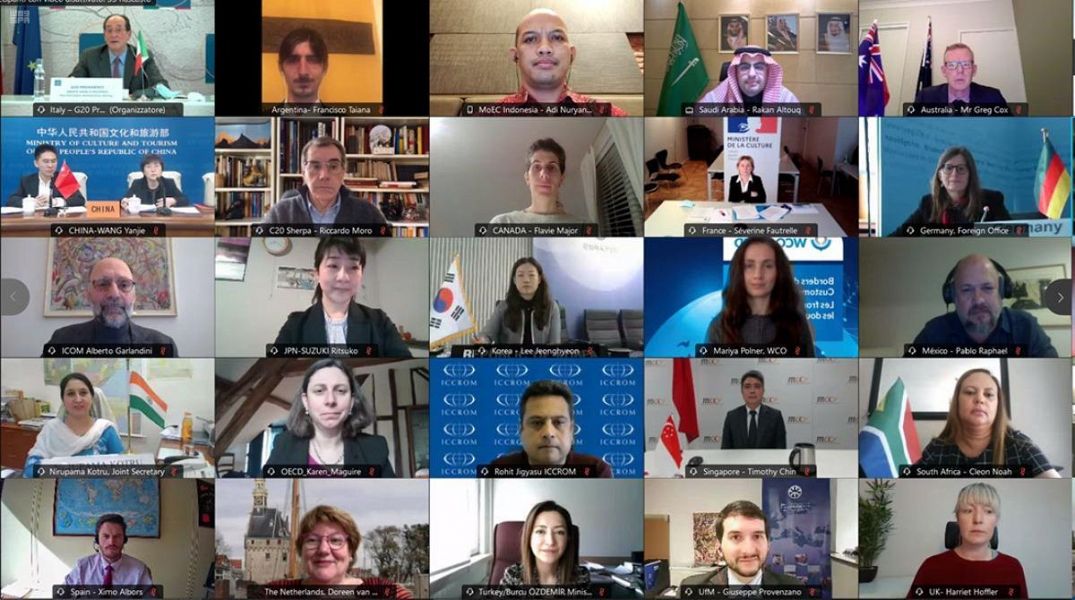 The G20 summit cultural track concluded virtual meetings today under the chairmanship of the Republic of Italy.
The delegation of the Kingdom of Saudi Arabia's Ministry of Culture to the meetings was chaired by the General Supervisor of the Cultural Affairs and International Relations Rakan Al-Touq, in the attendance of other delegations from the member states, international as well as regional organizations and working groups of the G20.
The meetings discussed cultural priorities and drafted the agenda for the second meeting of the ministers of culture to be hosted by Italy, on May 3, 2021.
The two-day virtual meetings included following up of the discussions over the cultural themes approved during the Kingdom's presidency of the G20, besides discussing the cultural priorities of the new rotatory presidency country in conserving the cultural heritage, fighting illegal trafficking of cultural properties, dealing with climate crisis through culture and building potentials via training and education, in the domain of heritage.
The Kingdom of Saudi Arabia has taken place in the meetings, in its capacity as deputy president in terms of the meetings related to the cultural track, in light of the Ministry of Culture's initiative to organize the first meeting at the level of ministers of culture for the G20 member states, in November 2020, which has enjoyed the backup, later on, of the executive council of the United Nations Educational, Scientific and Cultural Organization (UNESCO), upgrading it to a permanent meeting within the framework of the G20, scheduled to take place on annual bases.
The Ministry of Culture has organized the first meeting for the ministers of culture of the G20 last year, under the chairmanship of Prince Badr bin Abdullah bin Farhan, Minister of Culture, which dealt with the international cultural policies and means to consolidate them, against the current challenges. The significance of preserving the contemporary heritage and means of cultural expressions were also discussed, in addition to the themes of digitalization and innovation and conservation of the cultural, natural and submerged heritage.
The meeting was concluded with a declaration of establishing a special center to protect the submerged cultural heritage, in the Red Sea and the Arabian Gulf, as well, as part the wide scale endeavors the Kingdom of Saudi Arabia has exerted to preserve the natural heritage.