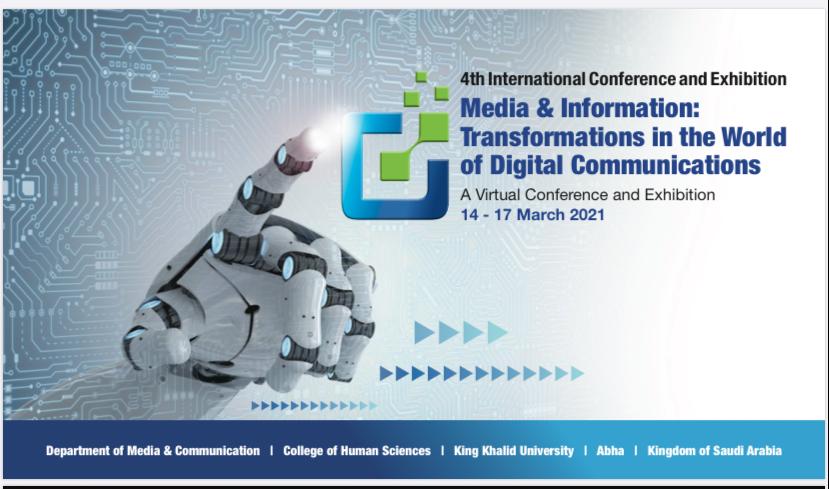 King Khalid University represented in the Department of Media and Communication at the Collage of Humanities, is to organize the fourth international conference and exhibit. It is entitled “Media and Information: transformations in digital communication”. it is to start on the 14th of March until the 17th.

His Excellency the University President Prof. Falleh bin Raja Al-Sulami, the General Supervisor of the conference, explained the conference is a result to the University’s believe in its scientific research role towards the society. It believes in tackling specified important topics, where the conference covered one of the important topics in the field of Media and Information which is the field related to the future of media industry. It also discuss major strategic issues in media, such as artificial intelligence, big data, data journalism, and their relation to the vast fields of media.

Al-Sulami added, this is the first virtual conference organized by the University. It is an international conference in which specialists from different countries participate. It is organized through a specialized electronic platform with high potential.

The Chairman of the Conference Organizing Committee the Vice President of Postgraduate Studies and Scientific Research Prof. Saad bin Abdulrahman Al-Amri, explained this conference is a result to the University interest in Media and digital transformation. It discusses a number of topics of modern scientific approach in the field of communication.

The Chairman of the Conference Scientific Committee, the Advisor to His Excellency the University President, and the Head of the Media and Communication Department Prof. Ali bin Shuwail Al-Qarni, explained the conference will include 12 session in four days. Around 60 specialists from around the world would participate.

Al-Qarni added the conference will cover topics like: the media uses of open sources in light of the new digital transformations, artificial intelligence role in the future of media industry. As well as the importance of big data in information overflow, and methods of data mining and its role in developing information analysis systems in the midst of communication revolution in modern institutions. In addition to identifying the role of online communication technologies in facing COVID_19 by viewing international experiences in e-learning.

It also deals with the scientific and professional aspects of data journalism to enhance current media practice, and discussing the possible solutions to face the newspaper and book crisis in the Arab world, and reviewing the existing alternatives to adapt to the scarcity of paper in Western societies. It is to highlight the effects of smartphone usage on the philosophy of communication in public and on the system of social and cultural change in contemporary societies.