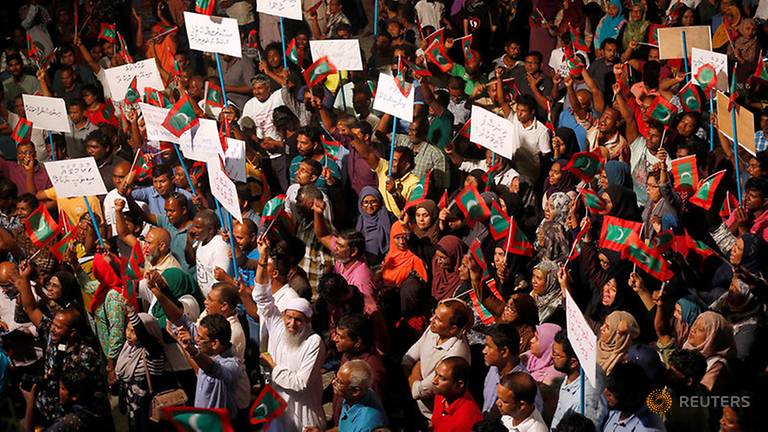 China advises its tourists to avoid Maldives till politics stabilise

A tropical paradise for holidaymakers, the Maldives has been beset by fractious politics for years, but concern over potential instability heightened after its attorney-general warned on Sunday that the government would resist any attempt by the Supreme Court to impeach President Abdulla Yameen for disobeying its order to free jailed opposition leaders.

"China suggests that Chinese citizens who are preparing to go to the Maldives in the near term to postpone going until the situation on the ground stabilises," Geng Shuang, a spokesman for the Ministry of Foreign Affairs, told a regular briefing, noting that the upcoming Chinese New Year was a peak period for Chinese tourists to visit the Maldives.

Geng said that China supports the resolution of differences

between all relevant sides in the Maldives through dialogue and consultation to protect its national and social stability.

The Chinese embassy to the Maldives on Friday issued a travel warning urging Chinese citizens to be cautious when travelling to the country, according to the official Xinhua news agency.

Mohamed Anil, attorney general of the Maldives, said on Sunday that the government had received information that the Supreme Court was preparing to fire Yameen, but such a move would be illegal and the police and army had been instructed not to carry out such an order.

Yameen has fired two police chiefs since Thursday, when the Supreme Court threw out terrorism convictions against former president Mohamed Nasheed and eight other opposition figures. Police had indicated they would enforce the ruling.

In power since 2013 and facing elections in October, Yameen is under international pressure to heed the court decision, while hundreds of protesters have taken to the country's streets to demand compliance with the order.

President Yameen's government has had good relations with China and a free trade agreement between the two countries was signed in December, despite criticism from the opposition.

China has been striking deals with countries in Asia and Africa in line with its "belt and road initiative" to improve imports of key commodities, upgrade infrastructure and trade routes in the region and boost its diplomatic clout.