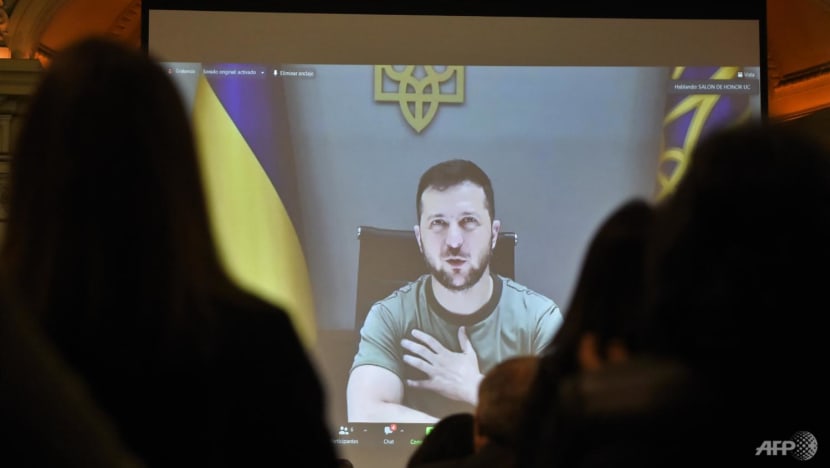 The meeting also comes a day after the head of NATO said it was "urgent" that the UN's atomic watchdog be allowed to inspect Ukraine's Zaporizhzhia nuclear power plant, where a Russian occupation has sparked concerns of a nuclear accident.

A spokesman for Guterres said that the UN chief, Ukrainian President Volodymyr Zelenskyy and Turkish counterpart Recep Tayyip Erdogan will discuss the grain deal, as well as "the need for a political solution to this conflict".

He added that he had "no doubt that the issue of the nuclear power plant" would be raised.

In his regular nightly address on Wednesday, Zelenskyy said Guterres had arrived and that the two would "work to get the necessary results for Ukraine".

Guterres is slated to travel on Friday to Odessa, one of three ports involved in the grain exports deal - hammered out in July under the aegis of the UN with Ankara's mediation. He will then head to Turkey to visit the Joint Coordination Centre, the body tasked with overseeing the accord.

The first wartime shipment of UN food aid for Africa reached the Bosphorus Strait on Wednesday carrying 23,000 tonnes of wheat.

Zelenskyy touched on the Zaporizhzhia plant in his address on Wednesday, saying Ukrainian diplomats and scientists were in "constant touch" with the International Atomic Energy Agency (IAEA) with the goal of sending a mission by the watchdog to the occupied nuclear facility.

"The Russian army must withdraw from the territory of the nuclear power plant and all neighbouring areas, and take away its military equipment from the plant," he added. "This must happen without any conditions and as soon as possible."

Earlier in the day, NATO Secretary General Jens Stoltenberg had told reporters in Brussels that Russia's seizure of the plant "poses a serious threat to the safety and the security of this facility (and) raises the risks of a nuclear accident or incident".

Also calling for a Russian withdrawal and inspections by the IAEA, Stoltenberg accused Moscow of using "the ground around the nuclear power plant as a staging area, as a platform, to launch artillery attacks on Ukrainian forces, and this is reckless".

The plant is the largest in Europe, and the uncertainty surrounding it has fuelled fears of a nuclear accident to rival Chernobyl in 1986.

Russia and Ukraine have accused each other of shelling the Zaporizhzhia installation.

Ukraine's nuclear operator Energoatom on Tuesday reported what it called an "unprecedented" cyberattack on its website, but said its operations had not been disrupted.

It added that it "was attacked from Russian territory" by a group known as "popular cyberarmy", which used more than seven million bots to attack the website for three hours.

A Russian strike in Ukraine's second city of Kharkiv on Wednesday hit a residential building that regional authorities said was being used as a dormitory for people with hearing impairments, killing seven people and wounding at least 16.

Nataliia Popova, an adviser to the head of the Kharkiv Regional Council, said that residents "couldn't even hear the air alert" and "couldn't respond to the rescuers during the rescue works".

A spokesman for the regional prosecutor's office said that the strike was believed to have been carried out with a cruise missile, and that 20 to 40 people were inside the building when it was hit.

Zelenskyy condemned the attack as "despicable and cynical", saying it "had no justification and shows the powerlessness of the aggressor".