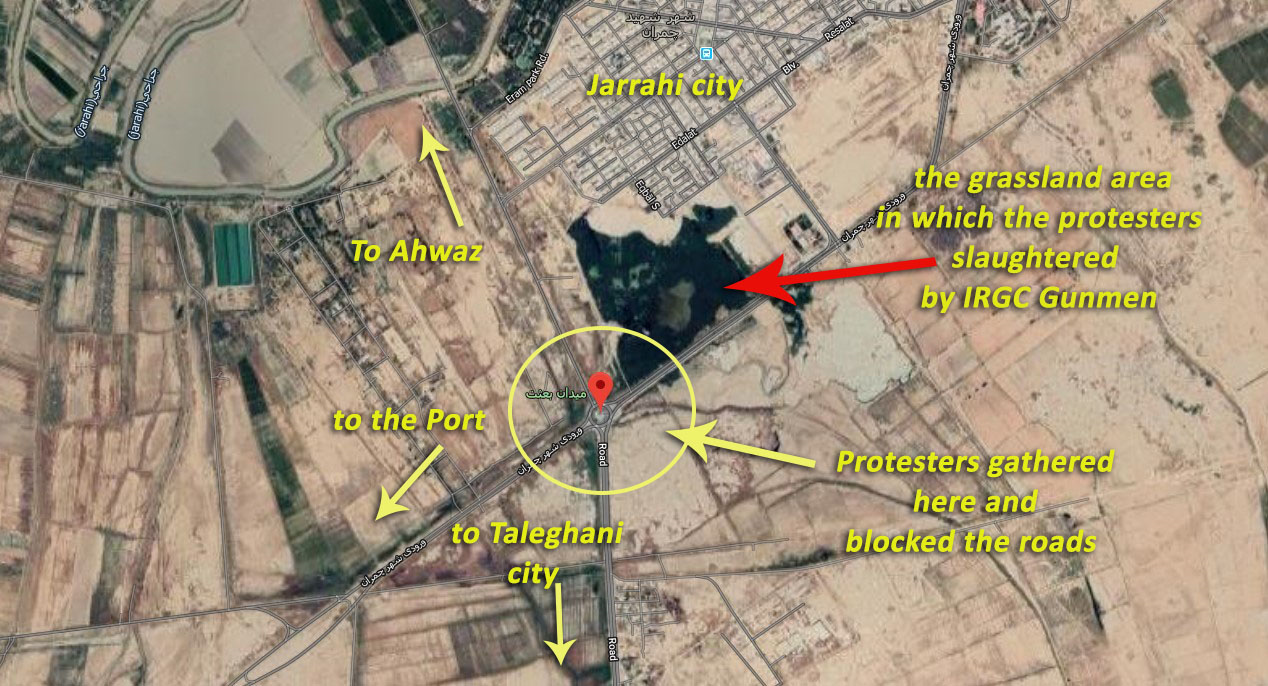 UN chief Michele Bachelet said on Dec.6: the picture now emerging from Iran is extremely disturbing, One of the worst incidents took place in the city of Mahshahr in southwest Iran on Nov. 18 when security forces fired at protesters with machineguns, killing at least 23 and possibly many more.

The city of Mahshahr is one of Iran’s important ports for the export of crude oil and oil-related products. Crude oil extracted from the Province of Khoosestan is transported to the Abadan refinery and the final products are destined to the city of Mahshar for export. This makes Mahshar an important city in Iran. Socially, ethnic minorities such as the Arabs and Turks make up the fabric of the city.

During the Iran-Iraq war, many found refuge in this city and later, opted to make it their permanent place of residence. Mahshahr is home to more than 20

Petrochemical Complexes, ranking it as one of the largest petrochemical centers in Iran and the Middle East.

In the last 4 decades, Mahshahr has been the scene of numerous protests and uprisings against poverty, hunger, and unemployment.

The people of Mahshar have felt shortchanged by the regime of the mullahs. On one hand, their city’s oil and oil products have been exported abroad and their share of the export money not only has been made available to them but instead has been used for terrorist activities of Iran’s Revolutionary Guards. In fact, their share of such a rich city of theirs has been the bullets that have been shot at them in their recent uprising. The youths of Mahshar have been slaughtered by the regime because of their participation in the protests.

The people of Mahshar joined nationwide protests triggered by a 300% gas price hike. They indeed were the creators of ample epic scenes at their war with Khamenei’s security forces. Such scenes should become part of Iran’s history of heroism and savagery. Although the true narrative of what happened in Mahshar is not yet been fully revealed, below is a summary of 3 days of bravery, sacrifice, and cruelty in Mahshar.

At the beginning of the protests, the people of Mahshahr initially did not burn any banks or centers. The protesters only blocked a few bridges in front of the access road to the Special Petrochemical Zone and blocked access to Khomeini Port.

But these simple protest actions were enough for the regime’s National Security Council headed by Shamkhani, Khamenei's national security adviser, to issue an order to province’s governor to send members of the special brigade, two tanks (yes really tanks), six army personnel carriers, heavy and semi-heavy and even military helicopters! The convoy first arrived in the city of Chamran and upon their arrival began to shoot at people with guns, and helicopters. They did not even spare the people who were not part of the protesters and were on their way to their home or work.

The protesters began to walk towards a grassland area to protect themselves from the onslaught, but according to a news reporter, the members of the revolutionary guards of the regime seemed to have gone mad and ambushed the grassland, killing many and created a sea of blood. The reporter cites a local source in his report that security forces were on a killing mission and did not spare any soul.

At first, about 17 people, including two children aged 2 and 5 and a seventy-year-old woman, were killed by direct shotguns. Several of those who lost their lives were among the wounded, but the guards had ordered the city’s hospital to refuse their treatments.

In the evening, the guards made their way the smaller towns and villages and continued their onslaught of innocent people.

The guards then entered the town of Taleghani with tanks and this time were met with people’s resistance. From six o'clock on Tuesday to one o'clock in the morning on Wednesday, all could be heard was the sound of shots being fired.

There are no exact reports of casualties, but the New York Times says at least 130 people were killed during the three-day crackdown in Mahshahr.

Mahshahr was one of the cities where protests were suppressed in the most violent way possible and news of its killing fields reached the outside world with delay. Reports indicate that the city's atmosphere is still very tense.

Images released in recent days from Mahshahr depict the presence of tanks and machine guns in the streets, and eyewitnesses have reported that security forces opened fire on protesters seeking a place to stay safe.

In response to the recent protests, Khamenei backed the killing of defenseless people, saying: "Yes, the police, the Basij and the Revolutionary Guards responded to the unrests and in a hard battle with people accomplished a tough task.

That main enemy, the global arrogance who is watching the situation understands what our response to the unrest means.

Earlier, Khamenei issued a decree calling for the suppression of the protesters, calling the suffering Iranian protesters as "miscreants" and said that in circumstances like this, hooligans, haters, and bad people are often the initiators and the participants.

At times, some youths create such incidents. These acts are not the work of ordinary people. These are insurgents.

who has so far endorsed the regime's crackdown, protested in the parliament,

saying, "What did you do that the Shah didn't do?" But other protesters grabbed his throat and pressured him.

The world has not yet heard the full story of the humanitarian catastrophe in Mahshahr because the regime has shut down the Internet to stop the spread of the news. Many people think the people of Mahshahr set banks on fire, on the contrary, not a single bank in Mahshar was harmed.

Mahshahr still feels a sense of upheaval and unrest. After the protests, the youths were still being arrested. Now the human catastrophe has engulfed the city in mourning and sadness, and the smell of the dead still lingers in the air.