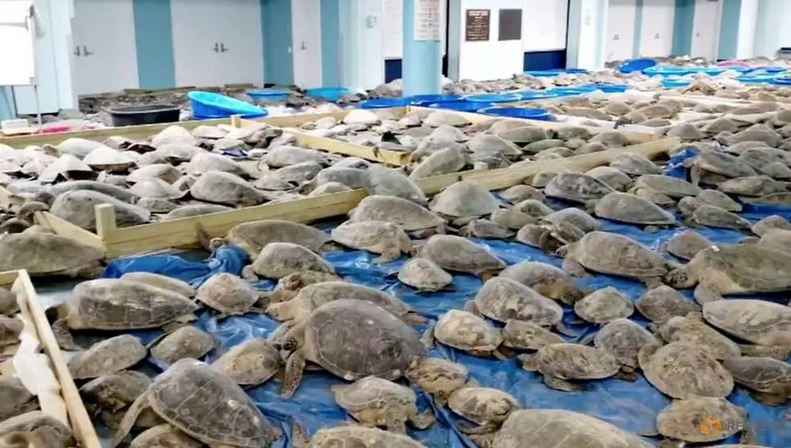 Thousands of 'cold-stunned' sea turtles rescued off coast of Texas

The brutal cold snap that has frozen Texas hasn't only numbed unprepared people to the bone: Thousands of turtles have been caught off-guard too.

Thousands of sea turtles unused to the plunge in temperatures have been washing up on the beaches of South Padre Island, off the southern coast of Texas. Volunteers have brought about 4,700 of them to a convention centre, where they are being kept in tubs and enclosures before they can be released when the water is warmer.

"It's an unprecedented event," said Wendy Knight, executive director of research and conservation centre Sea Turtle Inc, which has been helming the effort. Knight said normally only 100 to 500 turtles wash up on the beaches in south Texas each winter.

Millions of Texans have been left without heat due to energy blackouts in the state triggered by a cold spell in which both air and water temperatures have dropped well below typical levels.

Video shot by Ed Caum, executive director of the South Padre Island Convention and Visitors Bureau, shows volunteers carefully placing the animals on a trolley, and then the convention centre floor covered in turtles of all shapes and sizes.

Caum refers to the turtles as being "cold-stunned" - a condition where cold-blooded animals suddenly exhibit hypothermic reactions such as lethargy and an inability to move when the temperature in the environment around them drops.

"We've brought them to the convention centre to get their core temperatures back up," said Caum, narrating one of the videos.

In the latest video posted on Facebook on Wednesday, Caum related how the centre's power and water supplies were restored overnight.

"We've expanded down both wings. The heat is coming back up in the corridor," Caum says as the video shows a passageway filled with turtles lying end-to-end on blue canvas.

"We've collected a lot, now, we'll try to save them," Caum said. 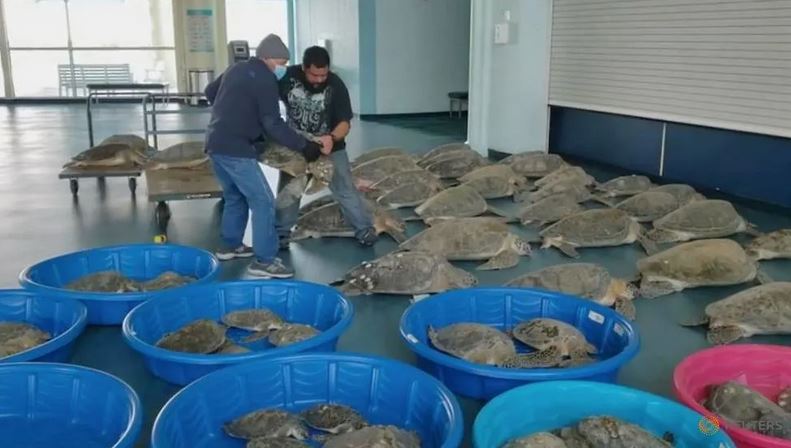