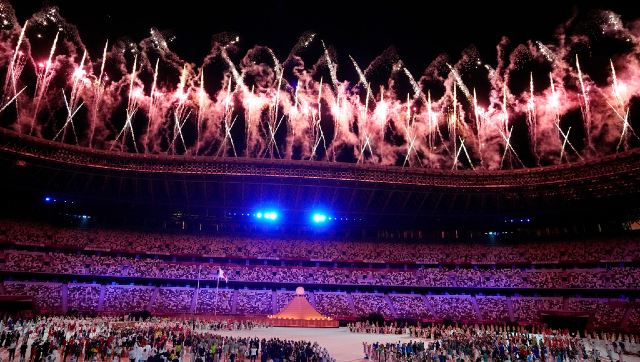 In an opening ceremony that was equal parts surreal and sensational, the Tokyo Olympic Games were officially declared open on Friday (Jul 23).
And in front of a largely empty 68,000-seater stadium, due to coronavirus restrictions, a large swathe of athletes were not present in a scaled down ceremony.
Still, a total of about 6,000 competitors and team officials, 900 Games stakeholders and guests of honour, and 3,500 members of the media were present, organisers said.
In an Olympic first, spectators had been barred from attending the ceremony as part of COVID-19 preventive measures.
And apart from sections of the stadium occupied by members of the media and various dignitaries such as US First Lady Jill Biden and French President Emmanuel Macron, the lights, sounds and sights echoed off empty seats.
Yet prior to the ceremony, there was an undeniable buzz on nearby streets as crowds gathered to snap photos and catch a glimpse of proceedings.
Held amid a state of emergency in Tokyo, the Olympic Games has been postponed for a year due to COVID-19. And after the postponement, the event has been mired in controversy, coronavirus concerns and a cold reception from some of the Japanese public.
Despite the rows of empty seats, the ceremony still had some of the flair and colour that have traditionally marked the opening of the Olympics.
The ceremony began with a series of videos - one featuring shapes which morphed into the National Stadium and a second depicting the sequence of events from when Tokyo was awarded the Games to the events of the coronavirus pandemic.
This was followed by a series of colourful fireworks peppering the night sky.
After the introduction of Japanese Emperor Naruhito and IOC President Thomas Bach, the Japanese flag was carried into the stadium on the shoulders of various flag bearers before it was hoisted.
Singing the national anthem was pop star Misia, whose powerful vocals drew those present into stirring applause.
Then came a traditional Japanese performance featuring local history, before giant wooden rings - made of wood taken from trees planted by athletes of the Olympic Games of Tokyo 1964 - were carried in and transformed into the Olympic symbol.
Next, the parade of nations, where athletes marched in to the various tunes of popular Japanese video games.
A stunning drone show above the stadium then drew gasps and applause from the crowd.
Following a recorded rendition of John Lennon’s Imagine, and speeches by Bach as well as president of the Tokyo 2020 Organizing Committee Seiko Hashimoto, Japanese emperor Naruhito declared the Games open.
Those present were treated to a creative segment involving actors forming the 50 human pictograms of the Olympics.
And nearing midnight in Tokyo, it was none other than Japanese tennis star Naomi Osaka who took the Olympic flame to the cauldron, bringing an end to a ceremony that will forever remain unlike any other.