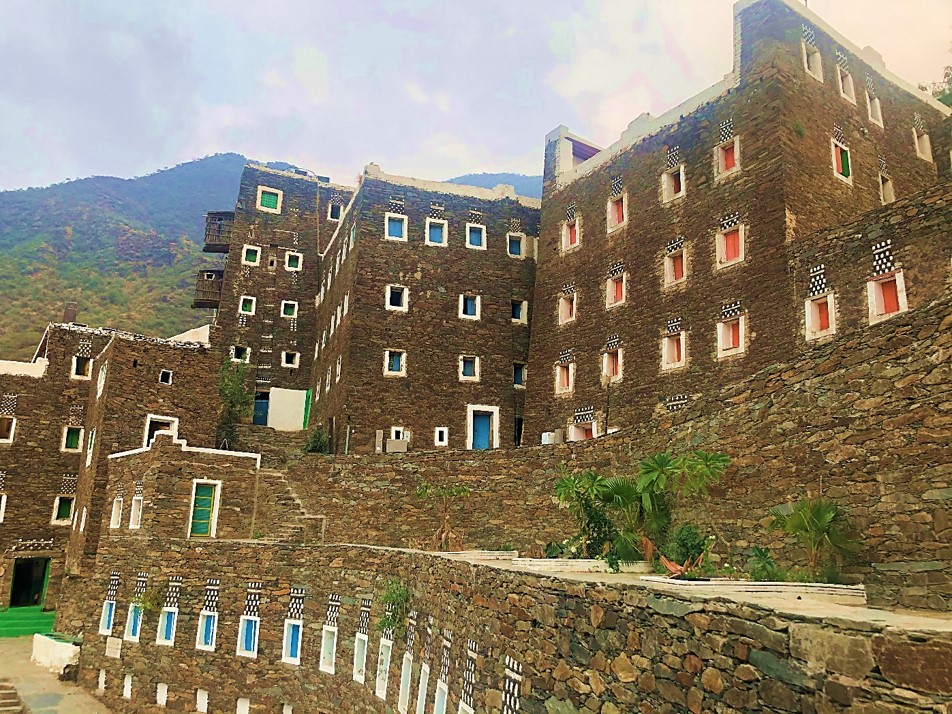 Abha is another important and exciting tourist city in Saudi Arabia, which just happens to be blessed with a mild climate all year round. Situated 2,270 meters above sea level, in the fertile Asir Mountains, Abha is referred to as the Bride of the Mountain, the Mist Lady or Abha Al-Bahiyeh (the fascinating Abha) due to its striking natural beauty.

The city and its winding streets are nestled across pitched hills, which embrace the city on all sides.

Some researchers believe that the city of Abha was called (Abqa) in days gone by, and was the site from which Bilquis, Queen of Sheba used to send gifts to King Solomon. I can see why she felt so inspired.

The Queen of Sheba is believed to be from Sheba, or Sabaʾ, an ancient Kingdom in the southwest of Arabia (modern-day Yemen). Sheba controlled commerce around the Bab el-Mandeb Strait, as well as parts of Abyssinia (Ethiopia).

The Queen appears to have travelled quite extensively around the Gulf States and North Africa because her name pops up in many of the places I have visit across the region.

Abha is the capital city of Aseer Province which is equal distance from the Red Sea and the Yemeni border in southwest of Saudi Arabia. I mention the border because it is worth nothing that occasionally unwanted projectiles do come from the direction of Yemeni border but the Saudi Authorities are ever vigilant and do a great job of keeping the community safe. 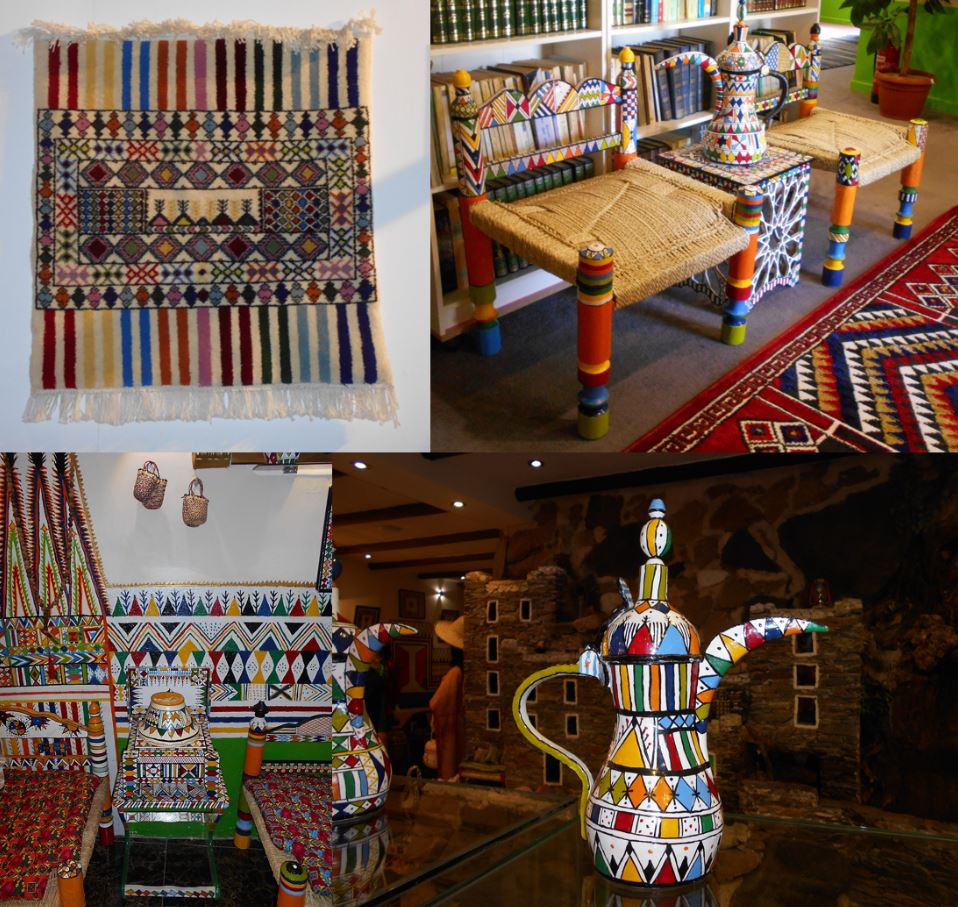 On my visit, I certainly saw nothing more than blue sky and fluffy clouds that hugged the mountaintops.

The population of Abha and its surrounding villages is about 400,000, most of whom live within one hour from the city. While the villagers engage in agriculture and farming activities, a growing number of young professionals are opting to remain at home and work in tourism or the arts.

The moderate climate consists of two wet periods during the year and contributes to the diversity of agricultural crops grown in the area. You will see plenty of poly-tunnels, which house everything from tomatoes, strawberries, avocadoes, pomegranates, to grapes.

Abha residents like to spend weekends and other holidays, outside their city, in the quiet scenic villages and temperate rural areas of Al Souda, Sarawat Mountains or the Tanumah plains. Soon we got to see why.

Abu Hani, our driver prepared a busy schedule. The first stop was Al Qatt Art Museum, which is just on the outskirts of Abha.

This well presented museum is an amazing discovery and set the tone for the rest of our trip. Created and promoted by husband and wife team, Fatemah Faya and Ali Moghawi.

Fatemah is a renowned local artist and Ali is a published author. 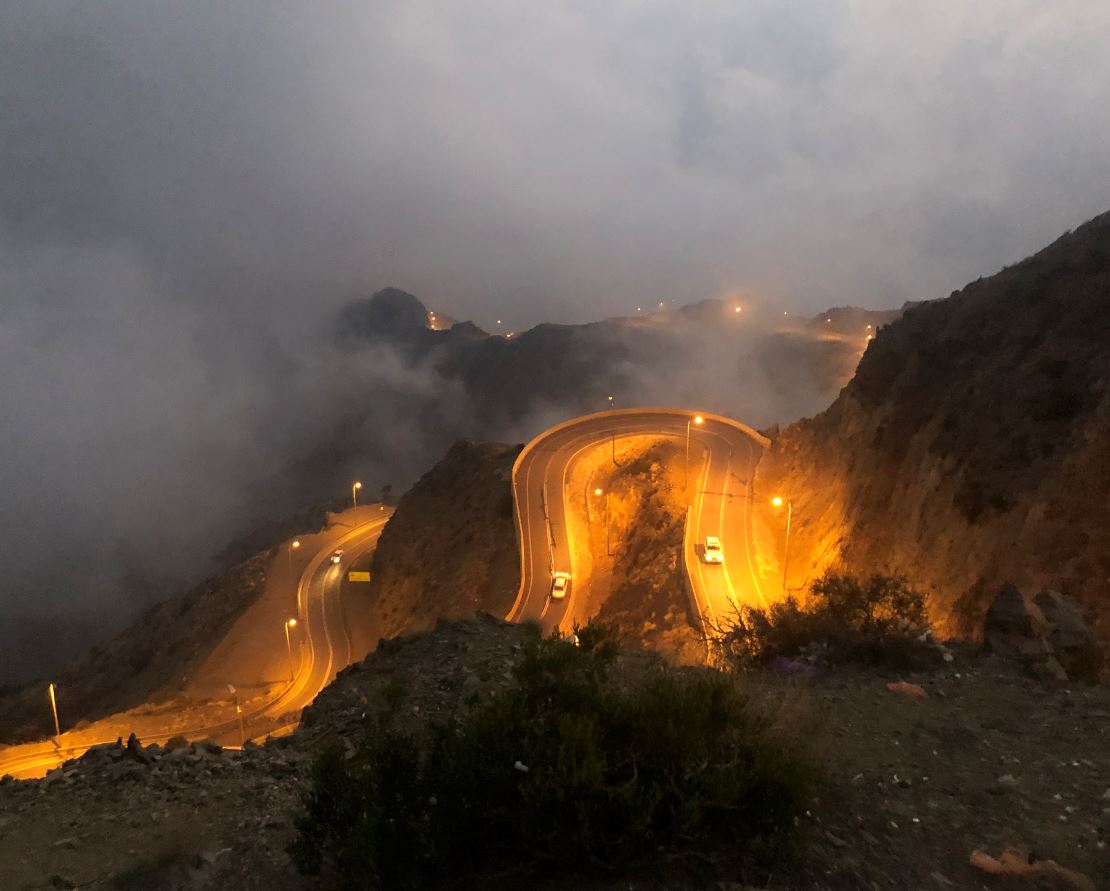 Both of them work tirelessly to save and promote local designs, colours and of course the story and history of the artistic and creative talents of the people of Asir.

The art works of Al-Qatt and Al-Asiri, are playful and very colourful. They tell a story of female empowerment where the women of the family feature heavily. The original paints used were locally sourced from plants and earth. Today these female inspired interior wall decorations, which decorate the majlis of traditional homes, are an acknowledged ancient and local art form.

Furthermore, this art form was added to the UNESCO List of the Intangible Cultural Heritage of Humanity in 2017. If you want to buy some of Fatemah amazing work, you can do so from Turquoise Mountain, which has a Riyadh based office. It is international foundation created by HRH Prince of Wales to revive historic and traditional crafts.

After a pleasant two-hour visit we all piled back in to our people mover to drive over an hour to Al Habala. Al Habala Tourist Park consists of a small mountain village, a cable car and some very impressive and striking valleys.

This area was inhabited by a tribal community known as the "flower men" because of their custom of wearing garlands of dried herbs and flowers in their hair. This tradition was born out of medicinal requirements as it is said that some of the herbs and flowers provide relief from headaches and other ailments.

In the past, Al Habala Village, which is suspended 300 hundred meters above the valley floor, was only accessible by rope ladders. In fact, the name Habala comes from the Arabic word for rope.

The flower Men were supposedly fleeing from invading Turks during the time of the Ottoman Empire. Everything they needed to save from the invaders was hauled up the cliff face via the rope ladders, people and animals!

In the 1990s, during a push to promote tourism in the region, the cable car was built to provide access to the traditional village and give tourist an immersive experience of the majestic mountain views.

Sadly, on our visit the cable car was closed, covid related, but none the less we were more than impressed with the majestic views of the valley and the surrounding country side.

Next day we set off for Bin Adwan Heritage village, which is over an hour north of Abha.

The drive north was along good road and from the passenger seat I was provided with a cine-reel of ever changing views of fertile terraced mountain slopes, examples of traditional builds, roadside baboons colonies, shrub covered hillsides, which are dotted with some rather large new builds out in the middle of nowhere.

In the car we debated what the views reminded us most of, and we could not decide if it was Granada Spain or Beirut Lebanon. It was hard to come to a conclusive answer, but one thing was for sure, we did not think for a minute we were in Saudi!

Bin Adwan Heritage Village is a labor of love, developed over 25 years. It is the sort of project that will never reach an end date! This is because the owner, Mohammad Al Ahmari, is such an avid collector of antiques. 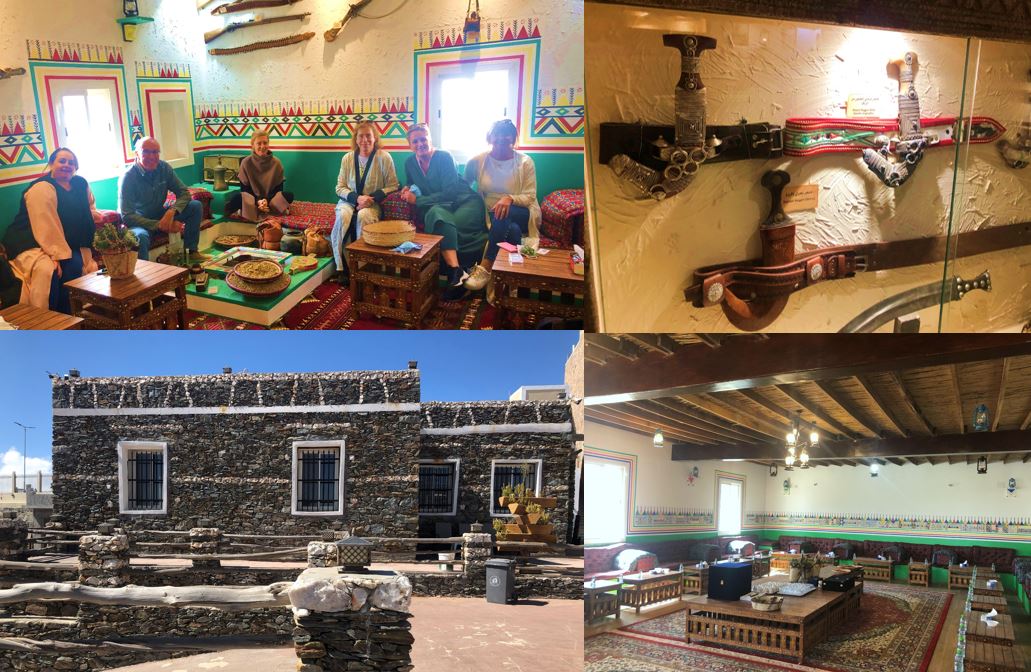 The museum, which tells the story of the local tribe’s people, from working to put food on the table, to how they defended their land. There is also antique jewelry, tradition costumes, old-fashioned guns, early telephones and radios.

The traditional part of the village has a number of beautiful majlis, some out houses for food preparation, a café and an entertainment area.

Mohammed is also a keen gardener and is delighted to show off his strawberry patch, blackberries, lemons and may other herbs that are nurtured in to life by the cool misty mountain air.

It’s a steep one lane road that twists and turns the whole way down. At its highest Al Souda is over 3000 m above sea level, so a certain amount of nerve and a good local driver is recommended.

Alsouda mountains and tourist village is located about 60 kilometers from the city of Abha. The mountains are green and covered in parts with dense juniper trees. If you plan to stay in the area there are a number of walking trails for hikers to take that lead to the cloud-tipping summit of Jabal Soodah peak.

Rijal Almaa Village used to be a natural passage and link between Yemen, Makkah, Madinah and Levant. Thus, it was a regional and bustling center for trade. Products were carried in by camels from the seaports and sold to the local community. The province was home to 10 tribes, which consisted of a number of clans, the museum preserves and depicted their architecture, educational systems, customs and artistic practices.

Rijal Almaa contains around 60 multiple-story buildings made of traditional stone, clay and wood. The village is historically significance and many of the old fortresses are renovated so that visiting tourists can see how the locals once lived. My prediction for Rijal Almaa Village is that it will become the Gstaad of Saudi, such is its beauty and potential. 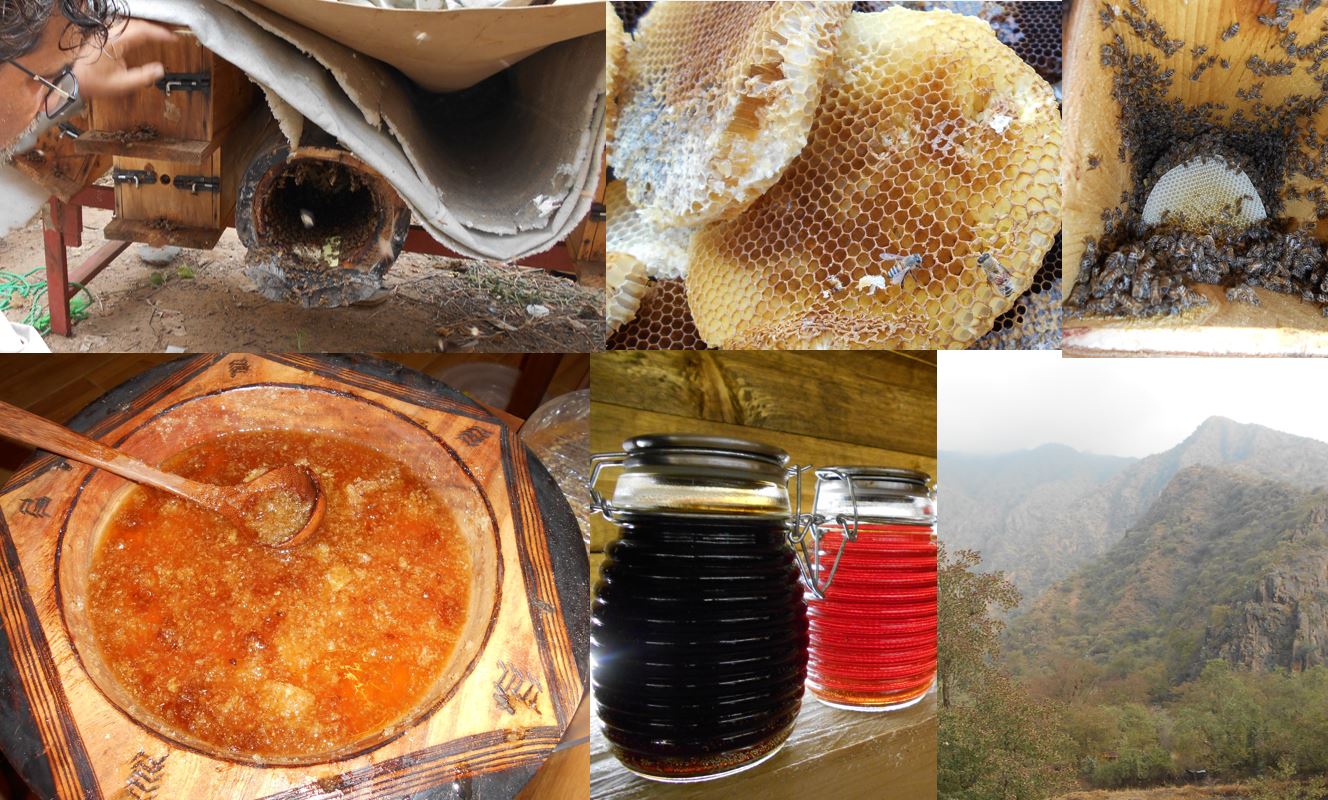 In ancient times, Honey was used as an antibacterial, for embalming and as an offering. It is very important in the everyday life of Arab communities.

The history of beekeeping in the Arabian Peninsula dates back to circa 2000 BC. An early earthen painting found in Iraq depicts honey as a remedy for disease, a fact many of us can say we agree with. Honey is one of the more prominent early products of Arabia and was enormously abundant.

Clusters of old apiaries can be found across the south west of Saudi. According to the apiary owners, these apiaries were built in the mountains around 500 years ago as Cylinder log hives which were stuck high up on the rock face to protect the hives from possible attacks by rival tribes.

Records show that some families have passed on the same apiaries over many generations in order to maintain the tradition and importance of beekeeping in a family line. The honey from such apiaries is prized and much more expensive than ordinary shop bought honey. Approximately 3500 tons of honey per year is produced in Saudi.

The Tuesday souk, located in Abha city, provides a glimpse in to a resurging artisan culture. Not only is it where the visitors practice their bargaining skills, an obligatory art form, it is also a souk largely run by talented and entrepreneurial local women. The ladies are usually clad in black abayas, many in traditional batoolas which are gold colored masks over their eyes and nose. The matriarch usually sits in the center of the shop directing her team to assist the browsing tourists to invest in some colourful and handmade gifts and souvenirs. I can assure you that you won’t leave empty handed.

If you have any time left on your visit, there is still much more to see in Abha city. It has many monuments that enhance its value as a tourist destination. The historical sites include the museum of Dar-Almaa for culture and heritage, Al-Muftaha Art Village, Al-Malha palace, and Shada Palace; in addition to many others such as the popular market of Rabou Al-Yazeed market, where visitors can also buy antiques, souvenirs and special folk costumes.

Hilltop fortresses are characteristic features of the city such as Shadda Palace, the main ruling palace, which built in 1820. It takes pride of place in Abha and is open as a museum for tourists to visit.

If you want to venture out for dinner, you can check out the newly built and popular High City, Green Restaurant or the N Lounge. Or you can just try some of the local Arabic restaurants which are most enjoyable and very affordable.

On a distant hill lies the Airplane restaurant, which is a 747 Jumbo that came by road all the way from Madinah and is patiently waiting to be turned in to a gastro dining experience. I hope it gets an artist make over so that it blends in to the local vibe and adds even more colour to beautiful Abha.