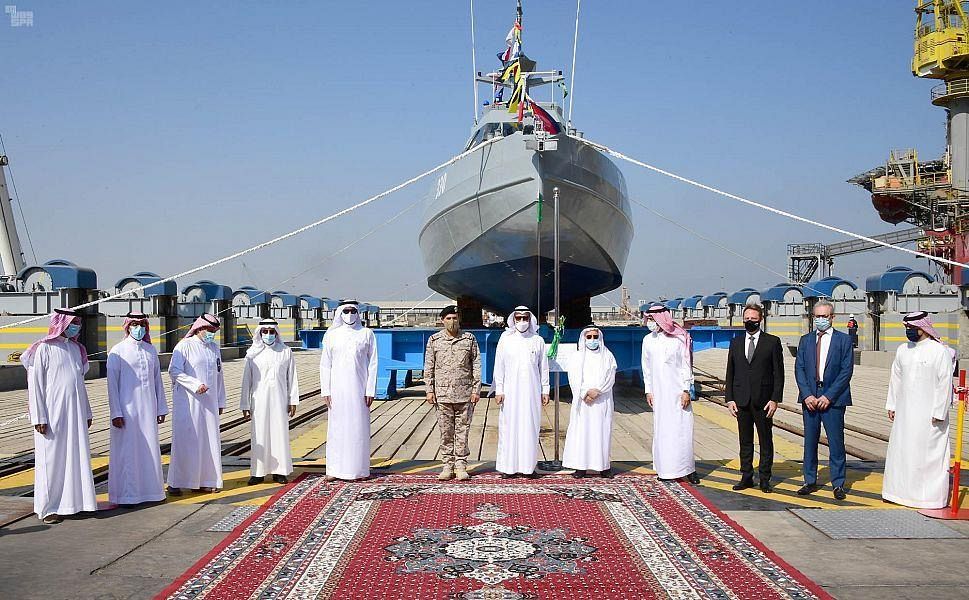 The Ministry of Defense and the General Authority for Military Industries (GAMI) announced the launch and localization of the first locally-manufactured HSI32 speed interceptor boats as well as the commissioning of the first Floating Dock.
This comes as part of a plan to localize military industries in the Kingdom of Saudi Arabia where they will be manufactured and localized locally according to the latest international specifications and standards in cooperation between the French CMN Group and Zamil Offshore Services Company.
The inauguration ceremony was witnessed, today at the headquarters of Zamil Offshore Services Company in the Eastern region, by GAMI Governor Eng. Ahmed bin Abdulaziz Al-Ohali; Commander of Royal Saudi Naval Forces, Admiral Fahd bin Abdulla Al-Ghufaili; President of Saudi Ports Authority, Eng. Saad bin Abdulaziz Al-Khalb; Chairman of the Board of Directors of Zamil Group, Dr. Abdurrahman bin Abdullah Al-Zamil; Ambassador of France to the Kingdom of Saudi Arabia François Gouyette and a number of senior officials from the relevant authorities.
On this occasion, the Governor of the Public Authority for Military Industries (GAMI), Eng. Ahmed Al-Ohali, highly commended the unlimited support and care of the wise leadership which has devoted all capabilities and resources to support this promising sector, pointing out that the manufacturing and localization of HSI32 system comes within the framework of the strategy of GAMI in achieving national priorities, setting up legislation for establishing military industrialization contracts, supporting and empowering local manufacturers and developing promising local companies to be pioneering companies in addition to supporting major national companies to strengthen their global position.
He added that the speedboats system will contribute to raising the level of military and security readiness of the Royal Saudi Navy Forces and also will contribute to strengthening the maritime security force in the region and protecting the vital and strategic interests of the Kingdom.
Admiral Al-Ohali indicated that the localization of the manufacturing of such systems comes as confirmation of the Authority's determination to move forward towards achieving its first strategic goal, which is to localize more than 50% of the Kingdom's spending on military equipment and services, in addition to expanding the scope and impact of current capabilities by 2030.
He concluded his speech by thanking and appreciating the Commander of the Royal Saudi Naval Forces for his support and assistance that effectively contributed to the inauguration of the first home-made HSI32 speed interceptor boat, which came as a culmination of the wise leadership's interest and keenness on the development and localization the industry of military machinery and equipment in the Kingdom.
For his part, the Commander of the Royal Saudi Navy Forces, Admiral Fahd Al-Ghufaili, affirmed that the localization of the speed interceptor boat systems is an actual and realistic embodiment of the Kingdom's Vision 2030, which comes in accordance with the directives of HRH the Crown Prince to achieve the strategic objectives of localizing the military industries in the Kingdom, including improving efficiency and effectiveness of spending and supporting localization of local manufacturing, aiming to significantly raise the level of industrialization of military equipment and systems through the Public Authority for Military Industries (GAMI).
He further said that from this standpoint, Zamil Shipyards has succeeded in signing an agreement with the French CMN Shipbuilding Company in order to develop the company's capabilities in the field of shipbuilding and speed boats, in which the French CMN reflected high credibility in this regard, with full commitment to the application of the highest standards of quality in the engineering of building boats.
He added this agreement is part of a national project aimed at developing the industries sector and that was done thanks to the efforts of GAMI and its pioneering role in building a sustainable local military industries sector that results in economic benefits to localize 50% of the Kingdom's military spending by 2030, so as to contribute to strengthening and localizing the military industries.
Finally, Admiral Al-Ghufili extended his thanks and appreciation to the Custodian of the Two Holy Mosques King Salman bin Abdulaziz Al Saud and His Royal Highness Prince Mohammed bin Salman bin Abdulaziz, Crown Prince, Deputy Prime Minister and Minister of Defense as well as to Prince Khalid bin Salman bin Abdulaziz, Deputy Minister of Defense on their constant keenness and unlimited support to develop the armed forces for the benefit of the nation.
It is worth mentioning that this batch of speed interceptor boats system, the first batch manufactured locally, comes as an extension of previous batches received by the Royal Saudi Navy Forces from the French CMN Group through an agreement signed between the two parties that includes the manufacturing and supplying of a number of speedboats of the type (HSI32), of which a part will be manufactured in France and the other part is manufactured and its technology is transferred locally to the Kingdom, within the framework of joint cooperation between the Kingdom of Saudi Arabia and the Republic of France in the field of military industrialization and cooperation.