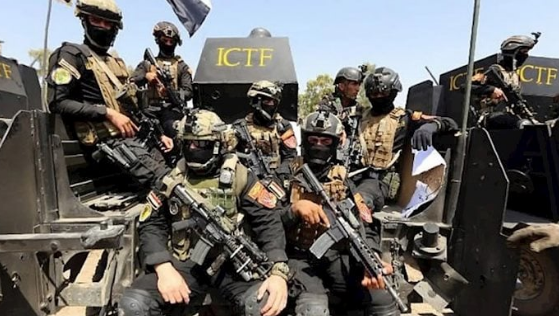 On Friday morning, June 26, 2020, Iraqi security forces arrested a dozen members of Kataib Hezbollah group Popular Mobilization Forces, also known as Al-Hashd Al-Shaabi during an operation. These groups were involved in the attack on American forces.

“Kataeb” is the strongest and most organized militant group of Iran’s Revolutionary Guards Quds Force in Iraq, and was formerly led by Abu Mahdi Mohandes. He was killed along with Qassem Soleimani in a US drone strike last January.

Reuters reported on July 26 of a raid on a Hezbollah headquarters in southern Baghdad and the arrest of several of the group's commanders: “Iraqi security forces raided a stronghold of a powerful Iran-backed militia in southern Baghdad late on Thursday and detained more than a dozen members of the group, government officials and paramilitary sources said.

The raid was the most brazen action by Iraqi forces against a major Iran-backed militia in years and targeted the Kataib Hezbollah group, which U.S. officials accuse of firing rockets at bases hosting U.S. troops and other facilities in Iraq.”

Al-Hurra wrote in a report on the operation and arrest of the leaders of the Hezbollah militias affiliated with the Iranian regime, and the discovery of ready-to-fire missiles: The Iraqi Counter Terrorism Service said it had arrested 13 armed men, including one of their leaders, in a night raid in southern Baghdad.

The service noted in a statement issued by the Iraqi News Agency (Nina) that during the operation, its forces seized missile workshops that targeted the Green Zone and Iraqi barracks where international coalition forces are based.

In this regard, the Iraqi Joint Operations Command wrote in a statement:

1. Accurate intelligence was available on people who had previously targeted the Green Zone and Baghdad International Airport with indirect fire several times.

2. The concerned [security] agencies monitored new intentions to carry out (firing). [sic] [Note: they’re staying away from using the word “attack.”] against government targets inside the Green Zone.

3. The whereabouts of the group carrying out the firing were determined, and a fundamental arrest warrant against them from the Iraqi judiciary was prepared in accordance with the anti-terrorism law.

4. The Counter-Terrorism Service was tasked with implementing to arrest and prevent the terrorist acts against state targets, according to jurisdiction, and [CTS unit] carried out the task with a high professionalism, arresting fourteen defendants, who are many in a group with the criminal identifications represented by two launching bases.

5. Upon completion of the implementation process, a special investigation committee formed by the Ministry of the Interior and the membership of the security services was formed.

According to the Iraqi Joint Operations Command, the Iraqi government's action so far is unprecedented. This action closes the hands of the mullahs’ regime ruling Iran for regional operations and extortion. This development is another sign of a change in the balance of power in the region and in Iraq against the Iranian regime. The regime's weakening position in the region is due to its fundamentalist and criminal policies in Syria, Iraq and Lebanon… Today, the anti-regime contradictions have reached their peak, and as a result, we have seen the uprising of the Iraqi people and protests in Lebanon.

As the Iranian regime's position has deteriorated sharply since the 2019   November uprising, and the Iraqi people have unanimously opposed the intervention of the mullahs in their country, the Iraqi government has found a more open hand to counter the mullahs' intervention.

On the other hand, the economic situation of the regime is deteriorating due to corruption, astronomical looting, sanctions, and the U.S. Maximum Pressure campaign, and the government is facing a huge budget deficit.

Developments in the past few months have shown that the removal of Qassem Soleimani has led to a strategic blow to a policy of crisis and terrorism, weakening the Quds Force's position in the region.

These developments indicate the regional decline of the regime, which is practically affecting the breaking of the spell of the Supreme Leader and the IRGC inside Iran.

The pillar of this fundamentalist regime is based on export of terrorism and the spread of fundamentalism in the region, the creation of the Shia crescent and intervention in other countries.

Therefore, any blow to its interventions in the region will be a blow to the strategic depth of this aggressor regime and will eventually lead to a weakening of Khamenei's position inside and outside the country.

If Khamenei's Shia crescent plan is hit and these steps continue like the Iraqi government's action, the regime's breath will be blocked and the Supreme Leader will be weakened by his repressive apparatus and so will the regime as a whole, and the path to the fall of the mullahs will be paved.